December is my least favorite month. I used to call it the “freezing rain” month. But lately it has been giving me more varied weather from warm and sunny to cold rain, freezing rain, and snow.

Holding a maitake, also known as a hen-of-the-woods mushroom (Photo by Dave Bonta on Flickr)

Since I write my columns four months ahead of time, I’m writing this one during the extreme drought and heat of August and wondering what December 2020 will bring.

After being “locked down” here since early March, I was not looking forward to late fall and winter. We’ve been living on our central Pennsylvania mountain since August of 1971 and most winters have been a challenge during the best of times.

Now, with the pandemic raging, these are the worst of times that my husband, Bruce nd I never imagined during our younger years. But with Bruce at 79 with Parkinson’s disease, I must remain fit enough to take over more chores than ever, aided by our caretakers and our two sons—Dave and Mark—who are sometimes here and sometimes not.

Mark and Paola in the forsythia patch near the house

Dave, unable to join his wife, Rachel, in London because of the pandemic, put in a large, fenced and mulched vegetable garden. He also did most of our food shopping, while Mark and his wife, Paola, did our banking, mail and drugstore pick-ups, and handled some of our larger property issues.

But by December, Mark and Paola may be off on new jobs, and Dave on a plane to the United Kingdom as soon as they open their country to Americans. Then it will be up to me to shop and handle all the other business our sons have been doing for us.

Steve and Zhouyue, “Joy,” at their wedding ceremony in China

Our oldest son, Steve, is teaching English in an American-run school in Shanghai and he, his Chinese Christian wife, Joy, and daughter Elanor shared a one-room apartment during the pandemic there. He warned us via Skype to wear masks whenever we left the mountain, claiming it was the only way to avoid COVID-19 as he and his family had done.

Furthermore, Mark, Dave, and Paola lived in the guesthouse and only visited us outside on our veranda and six feet apart. Our other granddaughter, Eva, who lives and works in NYC, along with her boyfriend Geoff, also visited us outside and camped in a tent beside the barn. But once winter sets in, we will greet visitors on the veranda bundled up in our winter coats and hats. Already there have been days when such visits were a freezing challenge. However, if this winter is as warm as last winter, it should be fairly easy to survive and thrive.

Birds arrived in mid-February 2020 that usually arrived in mid-March and we were ready for an early spring. Instead, March blew in cold and we were faced with trying to avoid COVID-19. No more weekly food shopping, library visiting, and lunch in a restaurant in State College. But spring had arrived and I had plenty to do, trails to take here, and birds and animals to observe. We were congratulating ourselves that it was spring and easy for us to get out. We expected by summer that the pandemic would be over.

In the meantime, the spring continued cold but the Neotropical migrants returned according to schedule. Wildflowers bloomed a little later than usual, but by May 10 even the trees had leafed out. That morning we had an unprecedented freeze. It was 25 degrees at dawn, and the herbs I had planted on my back porch had blackened beneath their plastic cover.

In the woods, the tender new leaves on saplings had also blackened and eventually dropped. Ferns too, especially sensitive ferns, looked dead. The buds on most of our pink lady’s slippers drooped and instead of our usual 30 to 40 blooms, I found four late in the month. It had paid to be a late bloomer for that species. The mayapples also were affected, and their flower buds dried up. Never had we had such a hard freeze so late in the spring.

The year had started out rainy and our vernal ponds continued to be full. In early March they were crowded with hundreds of calling and mating wood frogs. Although the ponds began dwindling in June, they finally dried up in July. We had gone from extreme rain and storm events to a drought that challenged Dave and his garden. Often, in July, we could hear distant storms, but all we received was a misty day.

Dave and Rachel at their wedding ceremony on Sapsucker Ridge

I left the mountain once in late July for fruit from the Amish in the valley and wore a mask. To my sorrow, the Amish orchard had lost all their apricots and most of their plums and early peaches because of the May freeze. Our wild blueberry crop had also failed. But I was able to fill our freezer with the black raspberries and blackberries I picked in our field and extra produce from Dave’s garden. Our caretakers gifted us with eggs from their free-range chickens. And I knew they would begin hunting as soon as archery season opened in early October.

Despite the setbacks in our food supply, living here surrounded by the natural world kept us sane and content. Bruce managed a walk down our road most days. He also did veranda-sitting and sunporch bird-watching. I rarely missed a day of walking up and down our trails. Dave preferred hiking in late afternoon in search of plants or during the night to observe fireflies, while Mark was up with the birds. 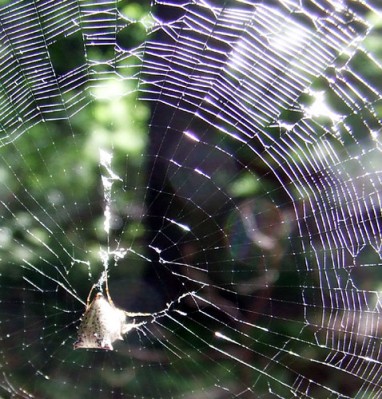 Both sons made discoveries they shared with me since they ranged farther and on steeper trails. We all bushwacked during the summer because there were no ticks anywhere from June through September. I even sat on the ground, my back against a tree, something I hadn’t done since the ticks arrived 15 years ago. The drought meant there were few biting insects too. But the spined micrathena spiders spun their usual orb webs across the trails in August.

Over in China, Steve too found bird-watching therapeutic and ranged far and wide in search of more species to add to his lifetime bird list that he first started here when he was seven years old. And he occasionally sent videos of his adventures with the tiny hedgehogs that lived on the school grounds.

In early November I will put up our bird feeders, which we’ve done for the almost 50 years we’ve lived here. I will also continue my participation in Project FeederWatch, which I began in 1989, even though the last several years have not been too exciting. Maybe this winter the northern finches will appear. Or maybe they won’t.

An eastern towhee (Photo by Mark in Plummer’s Hollow)

Last December it was so mild one day that a chipping sparrow appeared with the juncos at the feeders. And an eastern towhee wintered off Bird Count Trail, a discovery I made in December. We averaged 12 to 15 species at our feeders most days and more gray squirrels than we liked. But because of the excessive rain and then the freeze this year, acorns have been scarce for three years, although the scrub oaks did produce this year. American tree sparrows were sparse but we usually had a couple at the feeders. Still, they were so few that we didn’t hear their melodic calls during the winter.

The mild winter was a boon to the Carolina wrens that sang through even the few cold days that we had. The local Canada geese flock flew over every morning at 10:30. At least one field sparrow joined the First Field flock of song sparrows and white-throated sparrows.

Mark’s photo of a hermit thrush in Plummer’s Hollow

Coming home one evening with Eva late in December we saw an opossum at the gate, and on another night she and Geoff had a good view of a fisher running up our hollow road ahead of their car. I did my usual tracking in the frequent light snows and Mark his bird-watching. He not only found my eastern towhee but a hermit thrush as well above Bird Count Trail.

At the end of the month, I went for a walk in the silent forest at 2:30 in the afternoon. The light was the slanted light of winter but it was 65 degrees. I wondered if it was late fall, early spring, or an incredibly late Indian summer day. In any case, we enjoyed the halcyon winter days of 2020, unaware of the pandemic to come.

Now, in December of 2020, however long it takes before we can emerge from our self-imposed isolation, this pandemic year will be one to remember, a year when the natural world became even more of a solace than it has been for our family throughout our lifetimes.

7 thoughts on “A Pandemic Year”