Last February a hard crust covered the icy snow most of the month. That led to the highest number of common feeder birds I could remember since moving to our west-central Pennsylvania mountain home in 1971.

One snowy dawn seven northern cardinals, instead of the usual pair, flew in together and fed from the red tube feeder. Later in the morning eight cardinals joined three song sparrows, four American tree sparrows, and so many dark-eyed juncos and white-throated sparrows on the ground that I couldn’t distinguish one from the other or count them but there were dozens and dozens.

In mid-afternoon the snow turned to freezing rain and sleet. The little birds twittered loudly when I went outside to spread still another pound of mixed seeds that slid down the hill as did many of the birds. Then the rest descended like the proverbial locusts—a dark, moving blanket covering the white, slick surface.

Seeing so many common bird species on the ground as well as the American goldfinches, house finches, red-bellied and downy woodpeckers, white-breasted nuthatches, black-capped chickadees, blue jays, and tufted titmice on the hanging feeders, seemed a sign to me that at least our backyard birds were thriving.

But then last September an article appeared in Science entitled “Billions of North American Birds Have Vanished” by Elizabeth Pennisi. The piece was based on a comprehensive study of 529 North American bird species from 1970 to 2018 by 11 scientists from seven institutions led by applied conservation scientist Kenneth V. Rosenberg of the Cornell Laboratory of Ornithology. Unlike the majority of scientific papers, the results were so startling and unexpected that many news outlets covered the story.

Three billion birds lost, almost one third of North America’s bird population, from an estimated 10 billion birds in 1970 to seven billion in 2018, was the thrust of the study. Even Rosenberg was surprised by the results.

“I frankly thought it was going to be kind of a wash,” he told Pennisi. He expected rarer species would be disappearing but common species would be on the rise, making up for the losses, because common birds are usually generalists and more able to adjust to changes in their environment. 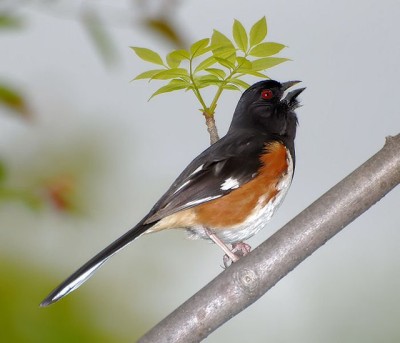 Furthermore, over 90% of the loss (2.5 billion birds) came from 12 bird families. The sparrow family was at the top of the list with 862 million gone including 20% of song sparrows and 40% of Savannah sparrows and eastern towhees.

The warbler family, with 618 million less, had sustained the second highest loss with half of Wilson’s warblers gone, 30% of Cape May warblers, and 60% of Canada warblers, for example.

The third family with heavy losses (440 million) was the blackbird family. Most surprising was the red-winged blackbird, the species always thought to be our most common native bird. They had gone from 260 million in 1970 to 170 million today. In addition, half the common grackles and 60% of bobolinks were lost.

The lark family at 182 million less occupied the fourth position and the finch family the fifth with a loss of 145 million including 40% of common redpolls and purple finches and 90% of evening grosbeaks. Still other losses included shorebirds that had declined by 37% and swallows, nightjars, and swifts by almost 50%.

While most feeder watchers were not surprised by the steep decline of evening grosbeaks (I haven’t heard or seen one in decades), I found it more difficult to grasp the lower numbers of our backyard birds—one in four blue jays and rose-breasted grosbeaks had disappeared and one in three Baltimore orioles, dark-eyed juncos, and white-throated sparrows.

After seeing the number of dark-eyed juncos and white-throated sparrows crowded at my feeder area last winter, I was especially surprised at their decline. Blue jays too seemed as noisy and abundant as usual, and our First Field supports several pairs of breeding song sparrows every year.

I was suffering from what study co-author Adam Smith, a biostatistician for Environment and Climate Change Canada, calls “shifting baseline phenomenon.” He says that, “because the declines are gradual, we lose track of just how abundant these birds used to be.” 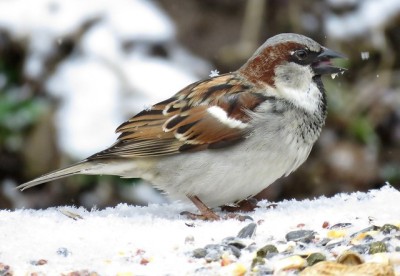 A house sparrow on a bird feeder in Pennsylvania (Photo by Cam Miller in Flickr, Creative Commons license)

That was even true for two non-native bird species. Difficult as it was to grasp, house sparrows had suffered a 70% decline and European starlings 50%, both species whose numbers have already plummeted in their native countries.

The researchers used annual road-based, North American Breeding Bird Surveys and Christmas Bird count data over the last 50 years as well as separate aerial surveys of waterfowl, shorebirds, and other bird families to document their losses and, in some cases, gains. From 2007 to 2017 they also looked at weather radar data to estimate the number of spring migrating birds and discovered that the biomass of birds had declined 14% during that time with the greatest loss especially in eastern North America.

Forests across the continent have lost a billion birds. In eastern forests that was 17% of our birds and in boreal forests 33%. Grassland bird numbers have fallen by 53%, a decline of 700 million birds, primarily due to habitat loss from the intensification of agriculture and development.

“These bird losses are a strong signal that our human-altered landscapes are losing their ability to support birdlife,” Rosenberg told Gustave Axelson, editorial director of Living Bird, in a comprehensive article about this subject. “And that is an indicator of a coming collapse of the overall environment.”

In other words, these disappearing birds are like canaries in a coal mine, warning us about the losses of birds and wildlife because of our unsustainable use of the Earth’s bounty.

Shooting passenger pigeons in 1875 in Louisiana (Drawing by Smith Bennett in Wikipedia, in the public domain)

The researchers seemed haunted by the extinction of the then most populous bird on earth—the passenger pigeon—in only a few decades.

Still, all was not gloom and doom. They credited governments and societies that invested in saving some birds, for instance, our Endangered Species legislation and the banning of DDT for the amazing resurgence of most raptor species by 200%, the North American Wetlands Conservation Act and conservation action by duck hunters for a 50% increase in waterfowl numbers, and dedicated conservation funding and efforts by hunters for a 200% increase in wild turkey numbers.

However, the increase of vireo species by over 50% and gnatcatchers by 15% is more of a puzzle. But then there are no simple answers for the anthropogenic problems birds and other wild creatures face in our crowded world.

Scientists now think that instead of focusing on single species at risk for extinction, we must conserve major ecological community types, or biomes, where birds live. We need to have collective action on a national scale, passing legislation such as the bipartisan proposed Recovering America’s Wildlife Act which would increase federal funding for state conservation programs by more than 1,500%.

The 50 million people in Canada and the United States who say they like to watch birds can also help, scientists say, by making their windows safer, keeping their cats indoors, reducing their lawns because the 60 million acres of lawn in our country produce little food for birds and other wildlife, and planting native trees, shrubs, and flowers not only to attract birds and wildlife in general, but the dwindling pollinating insects. Folks can also avoid pesticides on their land, drink shade-grown, bird-friendly coffee, and use less plastic especially single-use disposal bags, bottles, and utensils.

Most important of all, bird watchers should become citizen scientists and report birds wherever they see them by joining eBird, Project FeederWatch, the Christmas Bird Count, Great Backyard Bird Count, and/or the Migratory Bird Count. If they have excellent sight and hearing and know their birds well, they can also volunteer to conduct a Breeding Bird Survey route. As Rosenberg declares at the end of “Scientists Say It’s Possible to Bring Birds Back but the United States and Canada Must Act Now,” in Living Bird, “Birders are literally the eyes and ears who contribute the data that allow scientists to monitor the health of bird populations.” [The quote appears in the print version of the article, Autumn 2019, p.57, rather than in the online version, which was published with  a different title.] 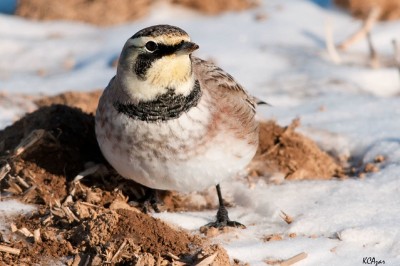 A horned lark in a farm valley of Eastern Pennsylvania (Photo by Kelly Colgan Azar in Flickr, Creative Commons license)

Now it’s early February and my husband Bruce and I will be conducting a Winter Raptor Survey along a route we drive every winter in a nearby valley. That’s also when we look for the large flock of horned larks we always find on newly-manured farm fields. Maybe if we’re especially lucky we will see a wintering snow bunting or Lapland longspur. That happened almost four decades ago when we went on a Juniata Valley Audubon Society winter bird field trip to the valley and found both species mingling with an enormous flock of horned larks.