As the days shorten, birds begin to migrate long before cold weather sets in. I notice the first flush of migratory birds on our mountain sometime in mid-to-late August. But September and early October are the peak months here for bird migration.

Now that they are on the move, birds enter the most dangerous phase of their lives, especially the immature birds that have never migrated before. They need safe places to land and forage, what ecologists call “habitat,” both water and land-based, depending on whether they are songbirds, raptors, waterfowl, or shorebirds.

Although researchers have made progress in studying how birds migrate, using the stars at night and landforms during the day, for instance, as well as what they eat and where they forage on land, they know less about what happens when the birds are airborne, especially when they encounter human activities.

But in the last decade some ecologists maintain that since birds spend much of their lives in the air foraging, migrating and sometimes even mating, especially swallows and swifts, airspace should also be considered habitat, not only for birds, but bats and a wide variety of flying and even migrating insects such as butterflies and dragonflies.

While there was some discussion of airspace as habitat early in this century, it was a paper written in 2013 entitled “The Airspace is Habitat” by research ecologist Robert H. Diehl that launched the new study called “aeroecology.” Diehl, who studies migratory birds at the United States Geological Survey’s Northern Rocky Mountain Science Center, cited numerous definitions of habitat by several well-known ecologists. He summarized their contention “that occupancy, and perhaps resource use, are essential attributes of habitat,” and concluded that, ”airspace satisfies these criteria.”

Since Diehl’s ground-breaking but brief paper, numerous studies have been done on all aspects of airspace and its importance in the conservation of birds, bats and flying insects.

Studies show that up to a billion birds a year die in the United States when they fly into the windows of homes and office buildings, the most common and numerous obstacles in their airspace, according to the American Bird Conservancy. In addition, seven million fly into communication towers, although the latter number may decline since the Federal Communications Commission issued guidelines suggesting that tower operations switch from steady-burning to blinking lights that are less confusing to birds.

Then there are the wind turbines that kill many species of birds and bats that fly into the huge, rapidly-spinning blades. Unfortunately, many of those turbines have been built in the very places where birds and bats migrate, taking advantage of the wind. Here in our area, the leading Allegheny Ridge, a proven migratory highway, has dozens of wind turbines erected on it and more to come in the future. To its credit, the Pennsylvania Game Commission does not allow wind turbines on game lands but plenty of private and local government-owned landowners in Pennsylvania do.

Well-known birder Kenn Kaufman, in his new book A Season on the Wind, relates an on-going battle by his wife, Kimberly, executive director of the Black Swamp Bird Observatory, to keep wind turbines off Camp Perry, a military-owned property along Lake Erie in northwestern Ohio, which is next to Magee Marsh and other famous migrating bird stopovers. He writes that “wind turbines placed in the middle of essential stopover habitat” [such as the shores of Lake Erie] “are likely to kill disproportionate numbers of long-distance migrants, birds that are already pushing the limits of survival.” The same is true of Pennsylvania’s own shoreline of Lake Erie.

Furthermore, Kaufman insists, the numbers of birds and bats the wind industry claims are killed by the turbines are vast under estimates. While using the wind as a source of carbon-free electricity is necessary, it would be better for the birds and bats if the installations were smaller and local instead of massive and requiring powerlines, another threat to birds and bats, to transmit the energy.

Light pollution from human-related sources such as office towers in cities is especially dangerous to night-flying and/or migrating birds. How light pollution in general affects birds is still another branch of aeroecology research. According to one scientist, artificial light can be seen as far as 224 miles on the horizon. Artificial light at night may change the ability of night-migrating birds to orient and navigate, and also change the way birds communicate and avoid predation in addition to possibly screwing up their geomagnetic sense that helps them find their way.

One study of the National September 11 Memorial and Museum’s “Tribute in Light” in New York City by a team of ornithologists over seven years found that the light changed the behavior of migrating birds at altitudes up to almost two-and-a-half miles. The birds gathered in high numbers, decreased their flight speeds, and flew in circles, all the while calling. But when the lights went out, the birds resumed their migration. The researchers agreed with other studies “highlighting disorientation due to artificial lighting” on many structures such as sport stadiums, construction sites, and offshore oil rigs. In addition, they found, ”There is mounting evidence that migratory bird populations are more likely to occur in urban areas during migration, especially in the autumn.”

Still, a variety of stakeholders in the Tribute of Light event, including the NYC Audubon and the Cornell Lab of Ornithology, agreed to keep the lights on despite its effect on the birds unless conditions were particularly hazardous and then they would shut off the lights for short periods. These shut-offs were enough for birds to continue on their way.

In Pittsburgh, every time the University of Pittsburgh football team wins a game, powerful lights are aimed high in the sky from the tallest campus building. These “Victory Lights” were on for the weekend of October 7-8, 2018 when Pitt won its game against Syracuse. At that time, nature writer and bird blogger Kate St. John was monitoring weather radar and noticed that there were large numbers of migrating birds around Pittsburgh. After she wrote about it, Pitt board members, the Pitt chancellor, and the Executive Director of Audubon Society of Western Pennsylvania agreed that the university would dim the lights for 15 minutes out of every illuminated hour so that trapped migrants could continue their journeys. 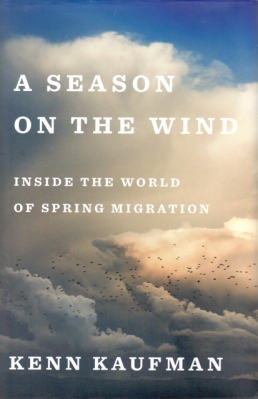 St. John was able to use weather radar to figure out the movements of migrating birds and how they react to human-related obstacles, because in 2004 the National Oceanic and Atmospheric Administration made its national weather radar data freely available to every interested person. Kaufman, for example, writes about how he and other birders check radar information on their computers every day and night during spring and fall migrations so they know when and where large pulses of migrating birds will land to rest and forage.

A wide range of other researchers, such as Jeffrey J. Buler, who runs an Aeroecology Program at the University of Delaware, uses radar data to study the effects of lighting on migrating birds and how such brightly-lit urban areas attract greater densities of migrating land birds. Such information has led to Lights Out and Dark Skies movements in Toronto, Chicago, and other major North American cities.

Still another study using radar found that migrating birds look for favorable winds and then fly in the atmospheric layers that have them. For instance, many migrating songbirds fly at night because of cooler air and less turbulence. But several studies have also been able to estimate how high most migrating birds fly in relation to human-caused collision threats.

The cruising altitude of songbirds averages 500 to 2,500 feet above the ground, raptors, taking advantage of the daytime thermals 700 to 3,000 feet, and waterfowl 200 to 4000 feet. In addition, tall buildings and their windows at 340 million and private residences at 253 million are the largest annual killers of migrating birds followed by powerlines (22.8 million), communication towers (6.6 million) and wind turbines (366,000).

This may be why some studies maintain that “a songbird is 15 times more likely to die during migration than during its long stays in its summer and winter territories,” Kaufman writes. And why some researchers in aeroecology are moving into what they call “aeroconservation” in order to keep not only the birds but the bats and the flying insects they eat safe as they navigate our crowded skies.