“Mom, there’s a porcupette in your herb garden,” our son Mark said.

I hurried out to see it. The little creature was tucked in against our brick chimney and flapped its tiny tail when I put my hand near it. Apparently, it had climbed up the slope from the overgrown flat area below.

The porcupette seemed young to be out and about on its own, especially in midday, because there was no sign of a mother porcupine. Still, we knew of at least one adult porcupine living under the guesthouse and spending its daylight hours high in a large white pine tree a few hundred feet along our access road.

I wondered if the porcupette was hungry and put some lettuce leaves close by for it, but the youngster remained huddled against the chimney for several hours and never touched the food.

I had not seen a young porcupine before and could not judge how old the porcupette was. Even though it was April 9, we had had another cold blast from the Arctic, and since my herb garden was on the south side of the house, the porcupette may have wanted warmth instead of food.

The following day there were two fresh inches of snow on the ground. Once again the porcupette appeared near midday and huddled against the chimney for the rest of the day. But late in the afternoon, an adult porcupine waddled up the slope and, when I went outside to look, she climbed a black walnut tree near the chimney. She never went near the pup, but I assumed she was the mother. 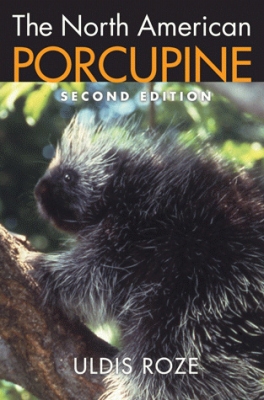 According to Uldis Roze, who wrote The North American Porcupine, often mother porcupines don’t defend their offspring. Furthermore, Roze claims that usually, during its first six weeks of life, a porcupette is too weak to travel long distances with its mother. She stays near her offspring by day, sleeping in a tree, while the youngster remains hidden in a ground den or in the hollow base of a tree. Then at night the mother comes to her pup to nurse it.

At birth a porcupette is well-developed and weighs about a pound. It is completely covered with black fur and quills, the latter stiffening in an hour. Our porcupette looked a little larger than one pound but, as usual with wild animals, I chose not to interfere with it by attempting to weigh it. Also I knew that its tail of quills was fully functional.

However, if the porcupette was older than six weeks, that meant it had been born in mid-February. This seemed unlikely since a female porcupine is pregnant for seven months, which would mean she had been bred in mid-July instead of the usual mid-October to mid-November breeding period of Pennsylvania porcupines. Even if she had bred as early as mid-September, her youngster would have been as young as a week when we first saw it. Maybe, like human babies, the porcupette had mixed up its days and nights. Whatever the case, it looked as if neither mother nor baby had followed the usual porcupine playbook.

A female porcupine mates once a year during an 8-to-12-hour period, but the lead up to it is fraught with screams even if she is sitting next to a prospective mate on a tree branch who has been lured there by following a vaginal mucus mixed with urine odor she has emitted.

During one porcupine courtship Roze witnessed near sunset in New York’s Catskill Mountains, the female retreated, turned her back and slapped him with her tail. He retreated and she sat facing him while still on the branch. She then began eating a twig she had snapped off. Again, he approached her and she kept feeding. She squawked at him and he retreated once more. He tried to touch her gently and she turned around and screamed. He backed off and tried to approach her as he made a chuckling sound, but she continued eating. Finally, they ate quietly side by side until it was too dark for Roze to see any more.

Roze concluded, “I realize I have not been admitted to a mystery. Despite years of study by naturalists, many aspects of porcupine reproduction behavior still retain this quality of half-revelation.”

That “half-revelation” was experienced by Kurt Engstrom on October 6, 2006, during archery deer season on SGL#176 near State College. Kurt is a friend of ours who keeps a detailed journal of all his hunting experiences. He was in his deer stand in the early morning and beginning at 8:00 a.m. intermittently until 10:00 a.m. he heard “moaning and chirping coming from the ridge, maybe 80 yards away. Finally, at 10:15 a.m., I had to go find what was making the noise. Approaching the noise, I found a large porcupine on the ground and then [saw] the second one about 7 feet off the ground in a small tree growing at a 45 degree angle out of the ground. The one in the tree [was] smaller and turned facing down the trunk at the one on the ground.” Female porcupines are smaller than the males and she was the one making all the noise that Engstrom had heard.

At that point, he gave up hunting for the day. Had he stayed around he might have seen what a few researchers have–the actual mating of the two prickly creatures. It happens on the ground after he has thoroughly wet her down with his urine. She may shake herself and retreat if she’s still not ready or she may acquiesce if she is. She raises her hind quarters and curves her tail back over her quill rosette which allows him to briefly mount her and mate. Between rest periods they repeat this sequence until either one tires, climbs a tree, screams at its mate, and ends their mating phase. He goes off and she is on her own as a single mother-to-be.

Although her pregnancy lasts seven months, during the winter she conserves her energy by spending most of her time in a den. The fetus remains small, but during the last month of pregnancy, when spring food of tender new leaves is available, the fetus doubles in size before it is born, usually in May or June.

The mother nurses her offspring for 127 days probably, Roze says, because her leaf diet is poor and she needs this extended nursing period. Once, before dawn, Roze listened to a mother nursing her pup. …”it was a musical affair… Both….were vocalizing continually, the baby in a higher register, the mother answering in contralto…the music continued uninterrupted for 30 minutes…”

Whatever the age of our porcupette, it appeared around noon on April 12 and clambered through our old discarded Christmas tree lying on its side near our bird-feeding area, and then it climbed a black walnut tree sapling. It went nearly to the top, gnawed a little on the bark, and headed back down, rear end first and front legs clinging to the tree trunk as it slowly descended to the ground. It walked over to a pile of ash logs and disappeared at 1:00 p.m.

Later that day, near five in the afternoon, I glanced out the kitchen window and saw it sitting in a branch sticking out near the top of a large split black locust tree that had fallen over the previous year.

The following day the porcupette was out on the back slope by 7:15 a.m. eating grass. Then it walked back to the broken-off black locust tree and climbed up to the new, young sapling growing out of it. I could see where it had gnawed off small patches of bark. It did more gnawing and climbed carefully down and then up again as if it was practicing its climbing skills.

Near dusk we saw the porcupette down slope near the ash branches eating grass for dinner at 7:00 p.m.

At last, on April 14 it was warm and clear. I spotted the porcupette in the juniper tree in my herb garden and had a perfect view of it from the stairway window. I watched as it figured out how to climb down through the maze of prickly branches and trunk which was more complex than the simple black locust it had climbed the previous day. It even tried to go head first but quickly reversed itself and used its sharp claws to cling to the woody surface as it went down bottom first. Once it regained the ground it trundled down slope to the broken-off locust tree and disappeared into its hollow trunk. That was the last we saw it.

We hoped it had joined its mother in the woods, spent the summer with her, and gained its independence when its mother entered her breeding phase. Both had taught us that even animals as common as porcupines have much to teach us about their lives.