My mother-in-law was a cat lady. Born and raised on a farm in northeastern Pennsylvania in the early 20th century, she, like most rural residents, then and now, knew the value of “barn cats”—free-ranging cats fed by farmers in exchange for the cats dispatching the rats and mice attracted to food they grew and stored. 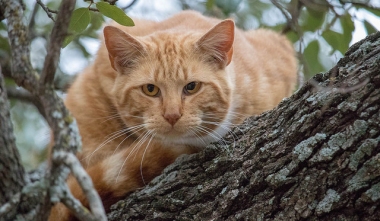 A stray cat hanging around a bird blind (Photo by runarut on Flickr, Creative Commons license)

On 25 rural acres in central New Jersey where my husband, Bruce, grew up, his mother fed 30 or more “stray” cats every evening. They also owned a pet indoor cat that had been spayed, received veterinarian care and the proper vaccinations, and never left the house.

I had not grown up with pets and was more interested in native birds and animals. But when we moved to Pennsylvania in 1971, we became reluctant owners of stray cats that folks dropped off at the bottom of our mountain. Our boys found kittens in our barn, and suddenly we had four adorable kittens to care for. In addition, a frequent visitor from New York City gifted us with mature cats she had found roaming free. 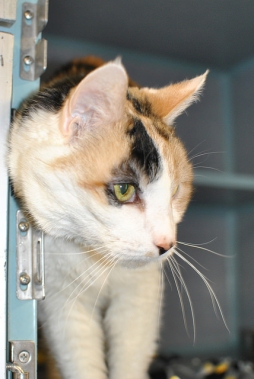 A cat in a Humane Society facility (Photo by Douglas Muth on Flickr, Creative Commons license)

Although we tried, the kittens refused to be house-trained, and I put them all outside. I continued to feed them, but one by one they disappeared. They were always replaced with more cats that migrated up our road. Finally, I started catching and taking them to the local Humane Society. After a couple trips, we were scolded for not getting them spayed and being responsible pet owners. I explained that we hadn’t asked for these animals, and I had no intention of becoming a cat lady like my mother-in-law.

I loved birds, and while I rarely saw any kills from these free-ranging cats, I knew that they preyed on wildlife. Eventually, I refused to feed any more cats. It was a difficult decision because they are beguiling creatures. And I was angry with the folks who dropped these unwanted pets out in the woods, thinking they could live on the wildlife.

Today I rarely see a cat on our mountain because eastern coyotes prey on them. But when we drive in rural valleys we often see cats hunting on the fields or killed on the roads. Many of these cats are feral or tame strays that don’t belong to anyone. Others are household pets allowed to roam outdoors.

Since the 1990s, more and more people—rural, suburban, and urban—own cats. In the United States there are as many as 80 to 90 million owned cats. Of these 60 to 70 percent go outside. In addition, scientists have estimated there are also 30 to 80 million ownerless cats that freely roam outdoors. 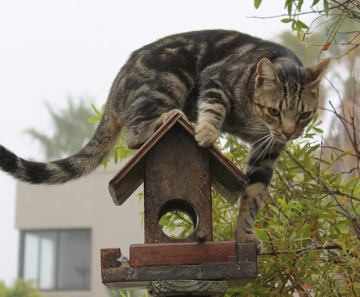 A cat on a birdfeeder hunting birds (Photo by Ian Barbour on Flickr, Creative Commons license)

One scientist, Stan Temple, set off a fire storm back in 1993 when he published a paper in the Wildlife Society Bulletin claiming that his research on farms in Wisconsin’s dairy lands found that cats were killing as many as 7.8 million birds yearly in the state and that a minimum of 10 percent of small-to-medium birds in a cat’s range were preyed on.

Temple was concerned about the USDA’s Conservation Reserve Program that paid farmers to replace erodible croplands with permanent grass cover in an effort to help the dwindling number of grassland bird species such as bobolinks, Henslow’s sparrows, and eastern meadowlarks. Those grasslands contained dozens of barn cats as well as free-ranging pets preying on the birds the program had been designed to help. 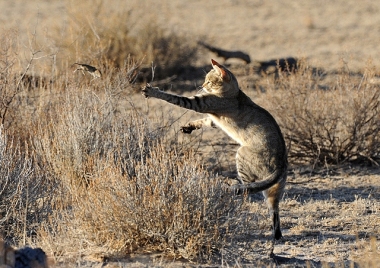 A Near Eastern wildcat (Felis silvestris lybica) playing with its prey (Photo by Daniele Colombo on Flickr, Creative Commons license)

Domestic cats, scientists pointed out, are not native cats but have evolved from the Near Eastern wildcat (Felis silvestris lybica) and have been spread worldwide by humans, arriving in North America before Columbus’s second voyage (1493-95). Domestic cats were even eaten by starving colonists at the Jamestown colony in the early 1600s.

Cats are not the only reason that one-third of bird species (233) in the United States have declined significantly since around 1970. Grassland bird species, for instance, have been most impacted by habitat loss and pesticide use in addition to cat predation. And Temple’s study was the first of dozens more that examined the impact of non-native cats on our native birds, although he received the most vitriolic hate mail and death threats and was accused of hating cats, even though he owns an indoor cat like many of the researchers who have studied the problem.

In 2013 a paper in the scientific journal Nature Communications, authored by Peter Marra, Director of the Smithsonian Migratory Bird Center, and his associates, estimated that cats killed 1.3 billion to four billion birds per year in addition to small mammals, reptiles and amphibians. Specifically, each free-ranging cat annually killed an average of 30 to 47.6 birds, 1.9-4.7 amphibians, 4.2-12.4 reptiles and 177.3-299.5 mammals including native mice, shrews, voles, squirrels and rabbits.

As a wildlife person, I was appalled. But the majority of people in our country are now urban and suburban inhabitants and their association with animals is with their pets—mostly dogs and cats. But dogs must be licensed and cared for and are completely dependent on their owners for food and exercise outdoors on a leash. Those owners must even dispose of their waste in a responsible way. 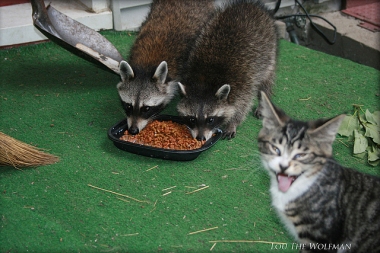 That’s not true for cats in many parts of our country. Pennsylvania’s own Department of Health as well as the federal government’s Centers for Disease Control and Prevention consider rabid cats to be a serious public health concern. Dogs used to be but since stray dogs are controlled here and owner dogs vaccinated, free-ranging cats, fed by well-meaning, compassionate people who love them, are often joined by raccoons at their feeding sites.

Raccoons, since the 1950s, have been the main vector for rabies in the eastern United States but from 1982-2014 there were 1,078 laboratory-confirmed cases of rabies in outdoor domesticated cats in Pennsylvania. Nationwide, by 2013, 53 percent of all rabies from domesticated animals were cat-caused and only 19 percent from dogs. Cats need several vaccinations over the years to keep them rabies-free, which is possible only if cats are owned and taken regularly to a veterinarian. 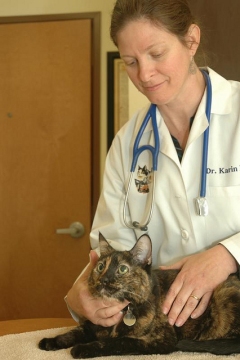 Admittedly, contracting rabies from either a wild or domesticated animal is a rare occurrence in our country. But Toxoplasma gondii, a parasite that is often transmitted through cat urine and poop, sickens as many as 22 percent of the United States population. Toxoplasmosis used to be thought fairly innocuous, but studies by neurologists have linked it to blindness and a large array of mental illnesses in some infected people. Most likely this “Zombie Maker,” as Peter Marra and Chris Santella call it in their eye-opening book Cat Wars: The Devastating Consequences of a Cuddly Killer, changes the brain chemistry in humans as it does in rats and other animals.

One study in the United States found that those with toxoplasmosis were 2.7 times more likely to develop schizophrenia later in life, especially if, as children, they had had close contact with cats. Severe depression, bipolar disorder and obsessive-compulsive disorders may also be caused by the disease. In addition, a study in 20 European countries seemed to prove that suicide rates in older postmenopausal women were positively related to the disease. Frankly, after reading the chapter on toxoplasmosis I was horrified that I had ever allowed our sons to play with stray cats.

Because the parasite gets into public and private water systems through cat urine and feces, it is also infecting a wide array of marine animals, wild birds, and other animals. Ongoing studies seek to find out exactly how dangerous toxoplasmosis is to them. Cats also contract feline leukemia which can spread to bobcats and cougars if they prey on free-ranging cats as I am sure our bobcats do.

Cat-lovers continue to question the findings of scientists regarding the number of cats roaming outdoors and the damage they do to wildlife because current estimates are based on extrapolations from many small-scaled studies. Still, given the current research, it seems that for the health of cats, their owners, and wildlife, keeping cats indoors is better for all. 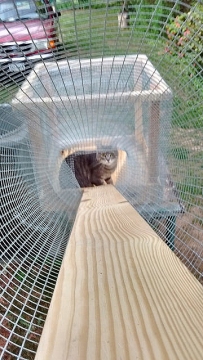 A catio with a cat inside (Photo by HackRVA Makerspace on Flickr, Creative Commons license)

Outdoor writer George H. Harrison, quoted in National Wildlife magazine, says that “indoor cats are healthier and longer-lived and a cat’s interest in birds can be satisfied by setting up a bird-friendly area outside your pet’s window.”

Other pet owners, including Stan Temple, have built cat enclosures, now dubbed “cat patios” or “catios” so they can enjoy the outdoors without endangering birds and other wildlife. They can also take agreeable cats for walks on a leash.

Much more needs to be done to prevent people from abandoning their pets in public places or feeding the resultant strays like my mother-in-law did. As Marra and Santella conclude in their book, “Inside, cats make excellent pets; loose on the landscape, they are—by no fault of their own—unrelenting killers and cauldrons of disease.”

4 thoughts on “Cats and Wildlife”