The request appeared in my junk mail from someone named Anna Mintz. She wanted to interview me about ringing boulder fields in Bucks County, most notably Ringing Rocks County Park, for a Russian television program. Somehow, she had discovered an article I had written about the park years ago.

I tried to discourage her, explaining that I was no expert on ringing boulder fields and that we lived four hours away from Bucks County and five from New York City where she was working. Undeterred, she rounded up a Ukrainian camera man and arrived at a parking area near our private access road in late February. My husband, Bruce, transported them and their equipment up our icy, north-facing hollow road.

Forewarned of their impending arrival, I reviewed my folder of pre-Internet information on ringing boulder fields. Their geological history began approximately 200 million years ago in the early Jurassic Age. Ancient Lake Lockatong had covered most of Bucks County and then had gradually filled with sediments that had hardened into shale. Molten rock within the earth was forced into the shale and hardened into a ledge of olivine diabase rock, sandwiched within the shale. But over the eons, the shale’s upper layer eroded and exposed the diabase. Subsequent severe freezing during the last Ice Age, when glaciers came close to but did not reach Bucks County, causing so-called periglacial conditions, broke the diabase into boulders.

another view of Stony Garden

Most boulder fields, such as the one at Hickory Run State Park, don’t ring, and researchers puzzled over why only the boulder fields in a thin line from northern Bucks County to nearby Montgomery County outside of Pottstown ring with melodious tones. Those tones inspired Dr. J.J. Ott, back in 1890, accompanied by a brass band, to play several musical selections at Ringing Rocks County Park. Current thinking is that they ring because of the density of the rocks and the high degree of internal stress that occurred when the molten rock came close to the earth’s surface and quickly cooled and solidified.

I was determined to explore this place and knowing that my younger brother, Gary, and sister-in-law Barb, who live in south Jersey, enjoy hiking in Bucks County, Bruce and I invited them to join us there last June 9. As it turned out, Gary had had a bad night due to illness, but he urged Barb to go. 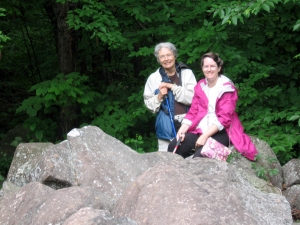 Marcia and Barb at the edge of the boulder field

It was an overcast day, threatening rain, when we met at nearby Nockamixon State Park for a picnic lunch. Afterwards, following a game lands map, we found the parking lot and Stony Garden Trail off Stony Garden Road. Although the trail is only a little less than half a mile long, it had its challenges. It was rocky and wet and we had to crawl over and under several fallen trees and cross a tributary of Haycock Creek. For those reasons, we were glad to be wearing sturdy hiking boots and carrying walking sticks.

It quickly became obvious why this place is called “Stony Garden.” I was reminded of a rock garden, so neatly did the wide variety of wildflowers, ferns and shrubs grow in the soil between the rocks, such as blooming partridgeberry and Indian cucumber-root, the leaves of spring-blooming jack-in-the-pulpit, wild ginger, bellwort, and mayapple and especially the fern rock polypody, which is common in rocky areas. Along the tributary, tall meadow-rue flowered. We found a few spicebushes, a nice maple leaf viburnum, and even a small American chestnut tree.

When we reached the boulder field, Barb and I didn’t feel sure-footed enough to venture out on the boulders so we stayed on its edges tapping on small rocks and making a little “music.” But Bruce climbed out on to the open boulders and made them ring, creating a range of tones by tapping them lightly with a hammer. He quickly found that the best sound came from thin rocks.

Remembering my childhood, more than 60 years ago, I was sorry that Gary couldn’t make it. We had often visited Pottstown’s Ringing Hill Park near the home of my paternal grandparents, and he and my younger sister Linda had leaped fearlessly from rock to rock while I and my youngest brother, Hal, being less surefooted, stayed seated on a boulder at the edge. I knew he would have enjoyed seeing this awesome place and joining Bruce in the middle of the field.

But on our day at Stony Garden, while Bruce made the rocks ring, Barb and I listened to wood thrushes, red-eyed vireos, and ovenbirds singing in the forest of red and black oak, black birch, basswood, American beech and tulip trees surrounding the rocks. We also noticed small weathering potholes in some of the rocks and intense pitting in others, photos of which appear in the Wikipedia article.

Later, we learned that an even larger boulder field existed deep in the forest. Unfortunately, by the time we made our way back to the parking lot, we had no more time to explore the rest of SGL 157. And by then the threatening storm was spitting rain. But all of the game land’s 2000 acres on the northwest slope of Haycock Mountain, including the boulder fields, were obtained by the game commission back in 1920.

According to LMO John Papson, the boulder fields themselves make attractive homes for chipmunks and probably a selection of other rodents. Furthermore, the surrounding rocky terrain does not prevent the deer from using the area, and, in fact, we did see a few tracks in the wet areas. In addition, the game land supports a healthy population of black bears, bobcats, coyotes, red and gray foxes, gray squirrels, and raccoons as well as white-tailed deer. Although there are food plots and some timber cuts, for the most part the forest we saw around the ringing boulder field is typical of the rest of SGL 157. 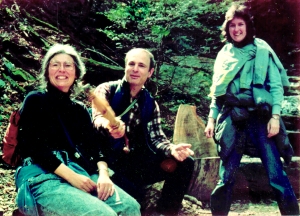 Today people come from Philadelphia and nearby suburbs, Papson told me, to hunt and hike, and they find it difficult to believe that this island of a forested mountain has such a wide variety of wildlife, especially black bears and bobcats, but their presence and other wildlife have been captured on trail cams. Judging from the mature trees growing in the forest, providing ample food for wildlife, SGL 157 should be a great place to hunt. But during the summer, when hunting opportunities are limited, taking your family to climb and ring the rocks should provide precious memories for youngsters, just as it did for me and my three siblings.