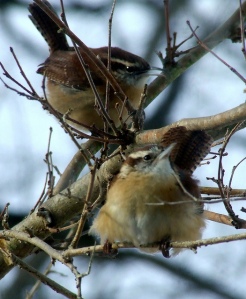 Last December I watched as day after day brought cold temperatures and more snow. We were expecting our son Dave’s English girlfriend, Rachel Rawlins, and her 14-year-old son, Alex, for the holidays, and Dave had already polished the sled runners.

Rachel, who lives in London, is interested in birds and arranged her schedule so she could be here for our Christmas Bird Count on December 21. It was the 114th CBC, as it’s fondly called, and is the longest running citizen science survey in the world.

Frank Chapman started the CBC back in 1900 to counter the competitive Christmas Side Hunt. On Christmas day folks chose sides, went out, and shot all the feathered and furred quarry they could find, and the team that killed the most won the competition. Chapman rounded up 17 birdwatchers from Pennsylvania to California, and suggested that they count birds instead of killing them. On that first count, five of the 25 CBCs took place in eastern Pennsylvania.

From that humble beginning, the CBC is now continent-wide with over 2300 count circles 15 miles in diameter. Ours is centered on a tiny crossroads in Sinking Valley called Culp. It includes our mountaintop property where we’ve been counting since 1979. For a long time I and one of our two birding sons—Steve or Mark—counted here. When they left home, I soldiered on alone, but a few years ago, Carl and Kurt Engstrom volunteered to cover the steep Sapsucker Ridge portion of our mountain while I covered the somewhat easier Laurel Ridge portion.

Recently, Steve and Mark moved back to the area, and Steve is now the CBC coordinator for the Juniata Valley Audubon Society count circle and is assisted by Mark. Determined to get total coverage of our circle, they have been going down to the valley to places that other members of our group are not able to count.

I figured Rachel and I would have a lovely slog through the snow, but after she and Alex had an invigorating time sledding on the 19th, they watched with us as the mountain turned from white to mostly brown under all night thaws and daytime temperatures in the low 50s Fahrenheit. Then rain and mist fell the evening before our CBC and into the early morning with dire predictions for the rest of the day.

The Engstroms set out by 8:00 a.m. after Carl reported four eastern bluebirds on our electric wires near the bluebird box and helped to count the meager number of feeder birds—a disappointing contrast to the huge numbers when we had seven inches of snow on the ground and temperatures had ranged in the low teens.

Undeterred by the weather, Rachel and I donned raincoats. I also carried an umbrella and kept my new “waterproof” binoculars underneath my raincoat, which did not make it easy to spot birds quickly. My so-called waterproof boots leaked as usual. Rachel, on the other hand, insisted in her British way that “layers of wool” would keep her warm and dry as did her waterproof boots and wool hat. Still, when the first deluge of rain hit us, like a cold tropical downpour, she didn’t object to sharing my umbrella through the worst of it.

The spruce grove in winter

Her job was to write down the bird species and numbers while I called out the identifications. At first she didn’t have much to do. We headed up to the spruce grove where I was certain we would find birds. But the birds hadn’t sought refuge there. We did instead, hoping for a cessation of the pounding rain. As we waited, we peered down into the valleys that were white with fog. At least we were above that. Those folks birding there might not fare too well. But we weren’t faring very well either, having neither seen nor heard any bird, not even on the heifer carcass staked out to attract golden eagles in front of a trail cam behind the grove.

On we sloshed to the Far Field. Still nothing.

“Are you game for a longer hike,” I asked Rachel.

Of course she was. As a British citizen, she was used to rain. Lots of rain.

We threaded our way through the trail-less woods beyond the Far Field and finally saw a downy woodpecker and northern cardinal and heard a black-capped chickadee or two.

From the Second Thicket, also empty of birds, we took a steep trail halfway down the mountain, stepped over a rivulet, and followed another trail through a hollow I long ago named Ruffed Grouse Hollow because I had once counted 40 ruffed grouse there on a CBC back in the early eighties. Not on this one, though. But we did find a couple of blue jays, a red-bellied woodpecker, and more cardinals and chickadees. And we heard a red-tailed hawk. Or did we? Blue jays are excellent mimics of red-tails.

“Put a question mark beside it,” I told Rachel.

All the while it rained, sometimes hard, sometimes not so hard. My shoes and socks were thoroughly soaked, but I walked fast enough that they felt reasonably warm.

A couple of times we questioned ourselves. What were a 73- and 52-year-old woman doing in this mad quest to count birds? Having fun, we assured ourselves over and over.

At last we reached the hunting lodge, and Rachel photographed the antlers hung on its back outside wall, especially one that held an old robin’s nest in its tines. After that, we took our first rest under the shelter of the porch and watched the rain. I had hoped that the hunters might have put some feeders of deer suet in their yard as they had the last time I had been there on a CBC. Then, I had been alone and in the midst of a snowstorm. But this time there was no suet or birds.

Maybe there would be birds in their autumn olive hedgerow or their cultivated fields. Nothing!

Back into the forest we went in search of the upper trail. And then, at 11:00 a.m., our luck changed. A red-tail flew over even as blue jays scolded.

“Count that red-tail,” I told Rachel. “It’s probably the same one we heard earlier.”

We saw a few more chickadees, downies, and cardinals. Then we plunged into an overgrown area in search of another trail heading back toward the Second Thicket. As I floundered around, Rachel said, “Look.” She pointed up at a cluster of black birches with fruiting catkins that were twittering with American goldfinches. I counted and re-counted and searched in vain for a pine siskin. After numerous counts, I settled on 29.

Just like that we were on a minor roll. Two golden-crowned kinglets answered my pishing and not Rachel’s trilling birdsong, which was her British equivalent of our pishing. I had been hoping for kinglets and was grateful.

“Maybe we’ll see a brown creeper,” I said. “It’s difficult to tell their call from a kinglet’s.”

“Look,” Rachel said once again, this time with considerable excitement in her voice, and she described the location of what resembled the Eurasian treecreeper. Sure enough, it was a brown creeper scuttling up a tree trunk like a tree-borne mouse.

That ended our short bird rally, although we did add still more chickadees, downies, cardinals, and three tufted titmice to our list, all birds we could have counted at our bird feeders. I did locate one hairy woodpecker in our forest, but after five hours and four miles of slogging through the rain, we had counted a mere 11 species. We also spotted one of the bluebirds Carl had seen earlier as we approached our yard, and with other species at our feeders—white-throated, song and American tree sparrows, mourning doves, slate-colored juncos, house finches, white-breasted nuthatches, and Carolina wrens—we had a grand total of 19 species.

Marcia at the Second Thicket, 2013 CBC (photo by Rachel Rawlins)

Later, at the bird count dinner, no one had done much better, although Carl and Kurt had found one hermit thrush amid the grape tangles on Sapsucker Ridge and our sons Steve and Mark had spotted a rusty blackbird in a large flock of European starlings and brown-headed cowbirds down in the valley. Even though we had dedicated counters, we had one of the worse counts ever—only 43 species in all.

In other sections of Pennsylvania on other days counters did better—155 species statewide with Southern Lancaster County’s 102 species the best count in the state. Still, we know that as citizen scientists, according to the Audubon website, our counting helps protect species and their habitat and has “allowed researchers, conservation biologists, and other interested individuals to study the long-term health and status of bird populations across North America.” With the CBC and other bird counts, as well as other scientifically-based studies in whatever field a person might be interested in, we amateur naturalists can make a difference.

Photos by Dave Bonta except where indicated.