I’m sitting on Alan’s Bench this breezy first day of November, watching for migrating raptors along our ridge top. Since we live on the westernmost ridge in the Ridge-and-Valley Province, I am up here most breezy autumn days.

The next day I’m at the same place, but it’s mid-afternoon instead of late morning. Another mature bald eagle flies high and slowly above Sapsucker Ridge. Two bald eagles in as many days seem like a good omen. I wonder if they are migrating or local birds.

Then, on the 30th of January, my husband Bruce and I, along with an enthusiastic young birder, Michael David, who is working on his year-long, Blair County bird list, set out on our Winter Raptor Survey in Sinking Valley. Our mountain, locally known as Brush Mountain, almost entirely encircles this rural valley. Partly farmed by Amish and mostly by English, its rolling fields are open to the winds of January.

We’ve picked a cold (five degrees) but clear day for our count. Ever since Greg Grove started this count, back in 2001, we’ve driven the same route that Bruce mapped out after studying the back roads that wander through Sinking Valley.

It’s a slow day at first for raptors, but Michael points out American robins feeding on staghorn sumac berries and an American tree sparrow amid the dried grasses beside the road. I later spot a pileated woodpecker in a small patch of woodland. We are looking for American kestrels on telephone wires, but all we turn up are mourning doves. On a large farm field in the middle of the valley, we count 26 horned larks so close to the road that we see every marking on them.

Near a stream next to a tree I notice a suspicious lump. It turns out to be a seated great blue heron. Just as we are musing over that strange sight, a golden eagle flies overhead. But mostly it’s a day for red-tailed hawks. On every tree line across a field are perched from one to a handful—26 by the end of our 32-mile, three hour, slow ride.

At one farm we stop to look at a large flock of brown-headed cowbirds because Michael thinks there may be a rusty blackbird among them. He gets out of the car and walks down the road to scan the flock which keeps flying ahead of him. I follow half-heartedly, knowing I’m not going to be able to pick out a rusty from the throng of cowbirds high in the trees.

Instead, I notice a huge tree far across a field. In it sits a large bird that looks as if it has a white head. It’s a mature bald eagle. Sitting on a branch above it is a second mature bald eagle. I’m excited and call Bruce, who’s been sitting patiently in the car, to bring our spotting scope for a better view. After several years of seeing one mature wintering bird eagle in the valley, I wonder if they are a pair and nesting somewhere nearby.

Back in 2011, when an Amish youngster who watches birds in his spare time first told us of a wintering bald eagle during our Winter Raptor Survey, I speculated about possible breeding. But I thought that because there was no river or lake nearby, bald eagles wouldn’t nest in a place without fish to eat.

A hard winter and late spring keeps me from returning to the valley until mid-May in search of fresh rhubarb and asparagus from Amish farmers. That’s when I learn that a pair of bald eagles is nesting on the other end of our mountain. My Amish friend has spent time watching them from afar across a steep, wooded ravine on State Gamelands #166.

They have two eaglets, he tells me, and once he saw a parent feed them a gray squirrel.

“It took them exactly 20 minutes to eat that squirrel,” he says.

Returning back across the valley on my usual circuitous route, I pass the tree where I had seen the eagles perching in January. One eagle sits in it. Later, when I take out maps and do the calculations, I realize that the tree is about one mile, as the crow flies, from the nest. I assume it is a favorite hunting area and learn from another resident that he had seen an eagle fly overhead with a rabbit in its talons.

According to Patti Barber, a biologist with the Game Commission’s Endangered and Nongame Bird Section, bald eagles are opportunists. In the winter they often live on carrion, and in Alaska even go into dumpsters. On the other hand, friends of mine who monitored three bald eagle nests in a nearby county saw them feed nothing but fish to the young, although they observed only four feedings. But once, in the middle of a road, they saw a bald eagle eating a dead woodchuck.

All of their nests were in very large white pine trees. Two were on steeply forested ridges and the third on a farm fence row. One was near a river, another near a lake, and the third near a small, wooded stream.

My Amish friend is amazed at the size of the nest.

“I once heard it described as like a Volkswagen upside down in a tree,” Barber says. “It’s the biggest nest of any bird in Pennsylvania.” And they continue to add to the nesting material every year they use it. 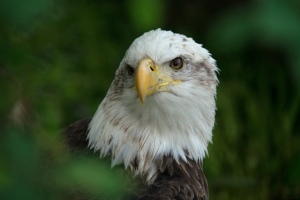 The number of bald eagle nests in the state keeps climbing. When I contact Justin Vreeland, Wildlife Supervisor of the Game Commission’s South Central Region, he tells me that 15 new nests have been reported in his 12-county region this year, and that our nest is the second one for Blair County. The other one is on a heavily forested slope above the Frankstown Branch of the Juniata River near Water Street.

Altogether, Vreeland knows of 70 nests in his region, but when he started working here in 2005, only 12 had been reported.

The number of bald eagle nests in the state continues to climb, Barber says. The 2014 mid-year inventory of nests was 254 in 59 of Pennsylvania’s 67 counties. But as Game Commission Director R. Matthew Hough said at that time, “The all-time high numbers illustrate Pennsylvania’s bald eagle population is better than ever. But these are only ones we know about. There are more.” And our nest is one of them.

At some point the state will reach a saturation number, but we’re nowhere near that, Barber tells me. For example, along the Susquehanna River in one area are two nests four miles apart. Then another pair nested between the two nests.

I have yet to see the Sinking Valley nest. My Amish friend tells me it’s a steep climb. But before I knew about this nest, we took our granddaughter Elanor to the Nature Center at Bald Eagle State Park in mid-April to watch a nest in a white pine tree halfway up a wooded mountain and across an arm of the lake from the Center. We set up our scope and had an excellent view of one parent sitting on the nest while the other flew low above the water in search of fish.

At a time when so much of the news about the natural world is dismal, the return of the bald eagle in Pennsylvania from three nests in 1983 to 254 and more to be counted in 2014 is a heartening story. If anyone would have told me when we moved here in 1971 that bald eagles would be nesting on our mountain, I wouldn’t have believed them.