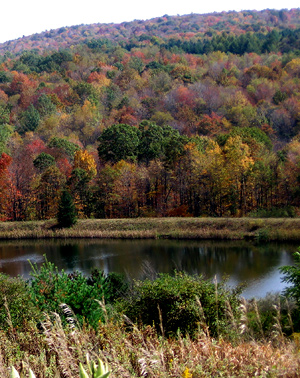 I’ve always preferred to walk rather than drive through the fields and forests of Pennsylvania. Still, I was tempted last October by a driving tour in nearby State Gamelands #108 and persuaded my husband, Bruce, to accompany me. It was a lovely autumn day when we found our way to a gamelands access road in Cambria County, not far from Prince Gallitzin State Park, and lined up behind a couple dozen cars.

At the gate we were greeted and handed several information sheets and a map that designated stops along our 7.5 mile, self-guided, one-way tour. We also tested our outdoor knowledge along the route by guessing the identity of marked trees and wildlife mounts including fisher, mink, ring-necked pheasant, black bear, barred owl, and bald eagle.

But we especially enjoyed stopping and talking to the agency personnel. I noticed the incredible abundance of pokeweed and staghorn sumac along the road and was assured by Joe McAnulty, one of the Food and Cover crew members, that they purposely widen roadsides to let in the sun, which encourages the growth of wildlife food, for example, the pokeweed and sumac, as well as blackberries and sassafras. They also allow wild grapevines to grow.

“We manage for animals,” McAnulty assured us.

With the help of special machines, also on display, they create wildlife openings in the forest to support native plants, legumes, or annual grains. They had just finished a prescribed 87-acre burn to encourage scrub oak to grow, which almost always produces a large crop of acorns every fall. In addition to the 23,086 acres of SGL#108, four workers are responsible for managing the 23,000 acres of four other nearby gamelands, McAnulty told me.

At another stop, we talked to a couple law enforcement personnel who showed us the amazing array of tools they need to foil lawbreakers. A deer exclosure, a couple shelterwood cuts, and a vernal pond were also highlighted on our route, but I was particularly eager to see a rehabilitated strip-mined area, which had been converted to a small-game and grassland nesting bird habitat. 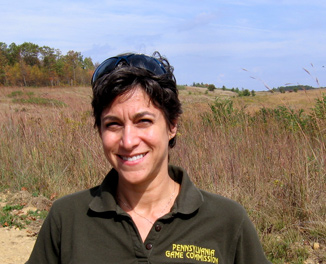 There I talked to biologist Samara Trusso who told me that short-eared owls winter on the grasslands in February and March. This is important because there is a chance that they might breed there too, although so far no breeding has been recorded. The short-eared owl is one of Pennsylvania’s rarest breeding birds and is listed as endangered in the state. Pennsylvania is the farthest south this mostly circumpolar species nests and then only rarely.

Trusso also said that the rehabilitated strip-mined area provides grassy habitat for grassland birds because the sites have acidic, nutrient-poor soils that produce grasses and legumes and have a slower rate of plant succession. But she assured me that the 40% shrub component of this large acreage has no impact on grassland breeding birds that have been documented for the site—grasshopper, Savannah, and Henslow’s sparrows, northern harriers, eastern meadowlarks and bobolinks.

That was our last stop, but we drove a couple more miles through the grasslands.

“This looks like harrier country,” I commented to Bruce just as a northern harrier flew up and over the grasslands.

Then, as the area grew more shrubby and medium-sized conifers, including larch and red pine, as well as deciduous trees provided more cover; two cock ring-necked pheasants strolled out in front of our car and fought. It seemed a fitting end to what had been a worthwhile tour and one that has been given every fall except for a year when it snowed.

To my surprise, we emerged at a gate on State Route 865 near Blandburg at the top of the Allegheny Front, a mere 26 miles from our home. I immediately made plans to return and see the breeding grassland bird species. Snow in late winter foiled my attempts to hike in and see the wintering short-eared owls, but one lovely Sunday in late June, hoping to see the documented grassland breeding birds, we parked at the Blandburg entrance and hiked back the way we had driven on the auto tour. Bruce was armed with gameland maps he had gotten off the web and had plotted out a circular route for us.

The first couple miles, amid the conifers and deciduous trees, we heard common yellowthroats, field sparrows, and song sparrows. But then, alternating with the singing of song sparrows, I heard the dreamy, lisping tsit-tsit-tsit-teee-taay of a Savannah sparrow. He remained hidden in the shrubs, but his song was unmistakable. A few minutes later, I heard the thin, dry buzzy tumble of notes of a grasshopper sparrow. He too remained out of sight in the shrubs. 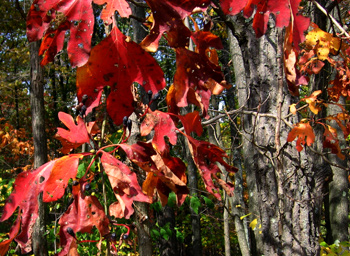 sassafras on SGL #108 (seen on the October tour)

We passed a large field white with daisies and heard a common yellowthroat sing both his familiar “witchity” song in addition to one of the less common variations of his song. A sudden breeze carried turkey vultures and a red-tailed hawk past. The hawk was then sent on its way by several red-winged blackbirds.

Eventually we reached the largest open section of grassland. The sun was hot and bright, and already it was late morning. I began to wonder if I would see any of the grassland birds. And then our luck changed. A Henslow’s sparrow sat in a dead shrub near the road and sang his quiet tsi-lick hiccup of a song. He was so close that we could watch him open his beak and sing over and over. I noted his short tail, flat, olive-colored head, big pale bill, finely striped breast, and reddish wings through my binoculars before he flew away.

Henslow’s sparrows are found mostly in the western part of Pennsylvania on rehabilitated strip-mined areas because they like a buildup of dead litter and perennial stalks, according to Andrew M. Wilson in the Second Atlas of Breeding Birds in Pennsylvania. The State Wildlife Action Plan lists the Henslow’s sparrow as a species of High Concern because we have about nine percent of the world population. This native of the tallgrass prairie has lost much of its habitat to agriculture in the Midwest.

I was especially pleased to see favorites of mine—bobolinks that rose from a couple shrubs beside the road, the three males scolding, their buff-yellow napes and white wingbars a striking contrast to their black bodies. Then a brown-backed female with a brown stripe on her head joined the agitated males.

the timber rattler that Bruce insisted on photographing

At the same time I noticed a timber rattlesnake crossing the gravel road in front of us. Bruce rushed up to snap several photos before it slid off into the field, causing still more anxiety on the part of the bobolinks. We watched them for as long as we could as we continued our hike past the grassland. Just as I was lamenting that I hadn’t heard or seen an eastern meadowlark, a male flew up from the middle of the field, flashing his yellow chest and throat, the latter with its black V necklace. Both the bobolinks and the eastern meadowlarks prefer to nest in hayfields, the bobolinks particularly in fields at 2,000 feet on the Allegheny Plateau. But early mowing has led to the demise of many young birds and so this high-altitude unmowed field is of great importance to those species.

From the top of the open grassland, we had a view in every direction encircled by mountains and forest. Despite the dry day, it was hot in the grassland, and gratefully we descended a trail down to a series of forested ponds. We sat on rocks beside one pond to eat our lunch. At another pond a female wood duck with her ducklings swam into cattail cover when they saw us. Singing woodland songbirds included wood and hermit thrushes, black-and-white and black-throated green warblers, ovenbirds, scarlet tanagers, cedar waxwings and indigo buntings.

Looking down on still another large pond from a small planting of red pines, we flushed a great blue heron. A ruffed grouse with half-grown young flew from the edge of the woods.

We spotted the first monarch butterfly of the season nectaring on yellow hawkweed, but it was near large areas of common and poke milkweeds growing beside the access road. That was where it would no doubt lay its eggs because monarch caterpillars only eat the leaves of milkweed species.

The last half-mile of our six-and-a-half mile hike was along State Route 865 where we saw and heard our first sign of people since we had parked our car. We were impressed by the remote peace and lack of even one piece of trash on this section of the gamelands. It was as far from the madding crowd as any place near our home—a prairie on a mountaintop where increasingly rare grassland birds thrive.