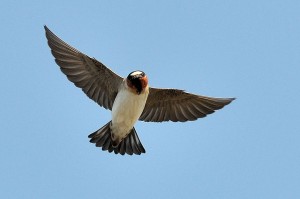 One hundred swallows perched on our electric line early last August 20. At first, I thought they were barn swallows. And a couple barn swallows were perched at the end of the line, but they were apart from the wing to wing closeness of most of the birds. Those swallows continually pushed each other off the line like rowdy boys on a playground.

They had white breasts, square tails, orange rumps, chestnut-colored throats and a white, triangular-shaped forehead band on their dark heads. Those field marks made them cliff swallows and bird species number 172 for our property.

I had not expected this species to be breeding anywhere near Brush Mountain, but when I contacted Audubon friend Stan Kotala, I learned that “most of the PennDot concrete bridges over streams have cliff swallow nests,” and that there had been a colony under the I-99 off ramp/on ramp bridge at Grazierville, a mile and a half as the crow flies from our electric line.

When I checked the site in late April, it was still too cold and early for the birds, but I counted 10 intact nests when I walked under the far end of the bridge spanning Little Juniata River, but even though there were more I couldn’t see, the swallows probably had come from other nearby bridges too.

McWilliams and Brauning, in The Birds of Pennsylvania, write that “cliff swallows have colonized new areas as concrete bridges replace steel structures”…because “concrete structures create a more secure base…for the swallows to attach their mud nests…” Those globular-shaped nests with an entrance hole are distinctive; hence, other common names for them such as “jug swallow,” and “pipe swallow.” If the colony is large enough, their nests are jammed next to each other just like the swallows on our electric line.

“Nowhere is the essence of the cliff swallow better captured than by birds sitting on a powerline,” writes Charles R. Brown in his charming Swallow Summer. Brown, who has been studying cliff swallows in western Nebraska since 1982, continues that “despite plenty of wire space, they always crowd together…These creatures insist on being together.” 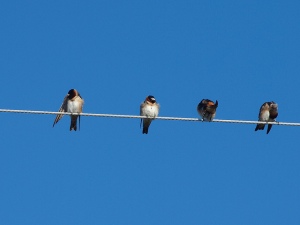 “They also insist on confrontation. An incoming bird often attacks one already sitting on the wire and tries to knock it off its perch. Others light, sidle toward an adjacent bird, peck at it, and try to make it fly.” Watching this, I was mesmerized by the action and regretted when, after an hour, they swirled off together.

Since August is the height of their migration period, and they migrate along mountain ridges, they were on their way to southern Brazil, south-east Paraguay or south-central Argentina where they spend their winters in flocks of thousands.

As spring approaches, cliff swallows begin their migration back to North America where they breed from Alaska to Nova Scotia and south from northern Mexico across to the Carolinas, although this species was once only found in the west. And, as Charles Brown and his wife Mary, who assists with his research, have found, especially in southwestern Nebraska. There they favor road culverts and highway bridges for their nests.

The Browns have found sites with as few as two nests and as many as 3,700. The “little butt-heads,” as Charles Brown refers to them because of their quarrelsome nature, are “competitive, cooperative, mean, insecure and thoroughly social” and their society is full of “theft, rape, aggression, exploitation, parasitism, competition and cooperation, egotism and altruism.” 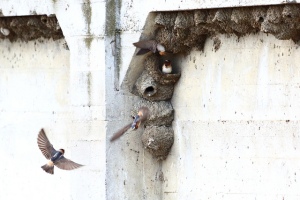 They will not necessarily return to old nest sites, having shown an east to west shift in Pennsylvania during the second breeding bird atlasing compared to the first atlas. But Brown has found that nests infested with “swallow bugs,” blood-sucking bedbugs as big as wood ticks that are brood parasites, discourage their reoccupation of old nests. However, there are fewer such ectoparasites in smaller colonies, so cliff swallows mostly reuse old nests by repairing them or finishing nests begun the previous year but never completed. Even though they seem to prefer nests that share their neighbors’ walls, probably because they are easier to build and weigh less, those built singly cling to the substrate better.

Cliff swallows are not territorial, defending only their nest site and nest itself from other cliff swallows. They pair up to build their nests, gathering mud in their bills from nearby water sources. Extra-pair copulations occur there, but pairs copulate within their nest after it has been partially built. Usually the male calls the female to the back of the nest with a soft “chur” call, and when she follows him and crouches, he mates with her. They also sleep in their nests when they are partially complete.

When their nest is three-quarters built, they line it with dry grass stems they gather from creek banks, haystacks and pastures. They frequently steal wet mud and grass from their neighbors’ nests if they are left unattended and continually repair their own nests as the season progresses.

Egg-laying often begins before their nest is finished. They lay anywhere from one to six, lightly-spotted, whitish eggs, but three eggs are the usual number. One parent guards the nest because their neighbors may enter their nest and throw out their eggs, so that they can lay parasitic eggs in them or move their own eggs into the nest.

Here in Pennsylvania, egg-laying begins in late May and into late June, but some have been laid as late as the third week in July. In small colonies, most pairs lay their eggs within six days of each other, whereas in large colonies egg-laying occurs over a three-week period.

Even though only the female has a true incubation patch, both parents take turns incubating the eggs an equal amount of time. The incubating parent stays at the back of the nest while the other parent is out foraging for food. Depending on how cold it is, incubation takes from 13 to 15 days.

Born naked and pink, the young are fully feathered by the time they fledge at three weeks of age. Both parents brood and feed them, catching beakfuls of flying insects and pressing them into a tight bolus for the nestlings. Once they fledge, the parents either transfer the food to them bill to bill while in flight or a parent drops an insect and the fledgling catches it.

Cliff swallows prefer swarming insects at all times of the year, and in Nebraska the Browns have identified 84 families of insects they consume. 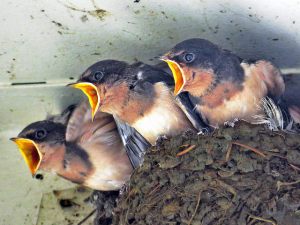 The young remain dependent on their parents for food for three to five days after fledging. But as soon as they fledge, they travel as far as three miles from their natal home to a crèche site where young of the same age from several nesting sites gather. Because parents learned the begging calls of their young in the nest, they are able to find and feed them in the crèche. The young also show incredible diversity of color and white speckling on their throats and foreheads which also may help their parents distinguish them.

Cliff swallows are amazingly adaptable birds. Unlike most species, they seem to thrive because of human-designed structures. Historically, they lived only in areas in the west that had vertical cliff faces with horizontal overhangs where they could attach their nests, hence their common name. But now they can live wherever there are bridges and buildings with overhangs to accommodate them. Ideally, most colonies are near open fields or pastures where they forage with a nearby water source.

The Browns continue to study these fascinating birds at 100 sites in Nebraska. They’ve discovered that common grackles prey on them by lighting on the nests and pulling the young out of the entrances. They also pounce on adults at mud sites, grab them with their feet and kill them with a couple pecks. 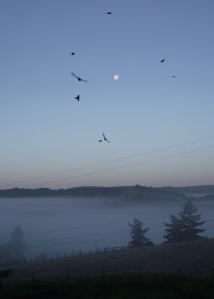 Brown writes that “predators attack the larger cliff swallow colonies so often that an individual’s personal risk is actually greater in a larger colony than a smaller one,” but he believes in long-term studies of numerous sites before you can “correctly interpret what you see at a single site.”

As part of his many hundred thousand captures and recaptures of cliff swallows at mist nets, as well as the dead swallows he and his colleagues have picked up on the roads, they have found that over a 30-year period, the wings of the netted birds have gotten shorter while those killed on the road are longer. Shorter wings allow them to take off and maneuver more quickly and avoid being hit by vehicles. Also, while cliff swallow numbers have increased at his nest sites, cliff swallows killed by vehicles have decreased.

Charles Brown says that “evolution is an ongoing process, and all this—roads, SUVs and all—is part of nature or ‘the wild.’ They exert selection pressures in a way we don’t usually think about.”