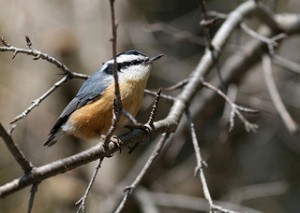 It began with red-breasted nuthatches. In early August 2012, one of the largest irruptions of this northern species in living memory started with reports from counties in eastern Pennsylvania. By the end of November unprecedented numbers were recorded in all 67 counties in the state.

In late September the first purple finches arrived in Pennsylvania and 63 counties had them by late November. Common redpolls and pine siskins began appearing in early October, evening grosbeaks by the last week in October, and both white-winged and red crossbills in early November. Even a few hoary redpolls and a couple pine grosbeaks made an appearance.

With so many northern finch species moving south, birders called it a superflight, which happens only once every decade or so when food sources fail in the north, forcing most conifer seed-eating species to fly south for food. I was especially excited that red and white-winged crossbills were in Pennsylvania, because our son, Steve, had had the only sighting of white-winged crossbills on our property eating hemlock seeds here in the winter of 1985 when I was in Peru. And I had never seen red crossbills.

Now that our hemlocks are dying from woolly adelgids, we could only hope to see crossbills in our 38-year-old Norway spruce grove at the top of First Field. By the first of October several red-breasted nuthatches had already arrived there.

Then, on November 15, I hiked to the spruce grove. Black-capped chickadees and red-breasted nuthatches foraged in the spruces at the base of the grove. But I heard an unfamiliar bird call and wandered through the grove searching for the source of it. Finally, I gave up, walked out of the grove and glanced back at the spruces one last time. At the top of a spruce two white-winged crossbills perched. They remained long enough for me to admire white wing bars on black wings, rosy pink breasts, heads, and backs, and even the crossed bills of two beautiful males. At last I had seen crossbills on our property.

Previously, in early November, I had had a male and then a female purple finch at our feeder area for more than a week as well as pine siskins for three days and, as it later turned out, they were the only pine siskins and purple finches to visit us during fall and winter. But already I had seen four irruptive species, and it was only mid-November.

Then a bout with Lyme disease, followed by a nasty virus, kept me inside for several weeks. It took time for me to regain my strength, and I was grateful when our Christmas Bird Count arrived on December 15, that Kurt Engstrom and his keen birder son Carl, came once again to help me. They covered the much longer and more difficult section on Sapsucker Ridge and up our road while I walked a mile and a half on Laurel Ridge. 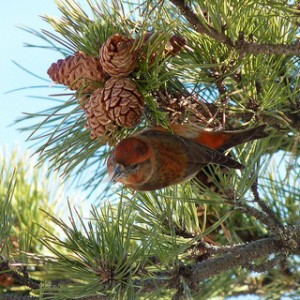 However, I did not recognize the call of another bird coming from the upper edge of the grove. I turned my head in that direction and spotted what appeared to be a dull-colored bird at the top of a spruce tree, continually calling, looking around, and flicking its forked tail. It had clouded over, making it difficult to distinguish any color on the bird. I kept studying it through my binoculars, and finally noticed that it had a crossed bill. When I pished, in an attempt to bring it closer, it flew away still calling.

I had listened to it for so long that the call was seared in my brain. After studying my bird guides, I was almost certain the bird had been a female red crossbill. Still, when Kurt and Carl returned, I told them what I had seen and heard. Carl didn’t say anything. He just started playing a series of calls on an Audubon Birds app on his iPod.

I was ecstatic. A new species—number 171—for our property and, as it turned out, the only crossbill reported on our Juniata Valley Audubon Society’s Christmas Bird Count. My red-breasted nuthatch was also the only one on our count.

Red crossbills live throughout the northern regions and high mountains in Europe, Asia, North America, and even the Atlas Mountains of North Africa. Here in North America ornithologists have teased out at least ten types of flight calls by red crossbills north of Mexico that some feel may be discrete species and others merely races or subspecies of red crossbills. Type 1, 2, and 10 calls were also heard in Pennsylvania, although type 3 was the most common. The calling of the lone red crossbill I saw may have been an effort to attract other red crossbills to a feeding source, according to some researchers.

Red crossbills prefer to feed on attached cones, using their feet and crossed bills like parrots to pry open the cones. Then they husk the seed coating by pressing a seed against the lateral groove opposite the side of the lower mandible tip with their tongue. Small seeds they swallow whole but crush large seeds in their bills before swallowing them. 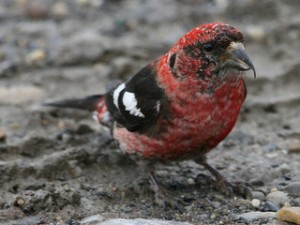 Even though both crossbills eat conifer seeds, red crossbills prefer the cones of pines, including white, pitch, scrub, scotch, red, and even table mountain in our area, but they will also eat hemlock, spruce, tamarack, and occasionally the seeds of deciduous trees.

White-winged crossbills prefer the softer cones of hemlock, spruce, and tamarack, but they will also take seeds from pines with stiff cones and occasionally those of deciduous trees. Researchers claim they eat as many as 3,000 seeds a day.

While both species sometimes visit bird feeders, I never saw either one at our feeders. I had plenty of time to observe them because I no sooner had I gained my strength back in early January than I was diagnosed with a deep muscle tear in my left calf which kept me inside for nearly seven weeks. That’s when I began to refer to last winter as the winter of my discontent.

I did see at my feeders the sixth irruptive species—a male common redpoll that appeared on December 21. He or another male and a female showed up on January 3, and on January 6 and the two following days, a flock of more than 30 common redpolls blanketed the ground and feeders. The bright red forehead and black chins of both sexes and the pink breast of the male are the distinguishing features of these mostly brown-streaked birds. I never did see a hoary redpoll among them.

I similarly failed to see an evening grosbeak at our feeders, even though this species made its best showing in over a decade in Pennsylvania appearing in 33 counties.

Although most were gone from the state by mid-December, up to 150 at a time appeared at a feeder in Marienville, Forest County.

White-winged crossbills arrive and leave on the same schedule as red crossbills, and there are no records of breeding here. During one of the largest crossbill invasions in Pennsylvania in 1997-98, over 1,000 white-winged crossbills spent the winter in Cook Forest State Park and were often joined by lesser numbers of red crossbills. But we never saw them on our mountain then, probably because our spruce grove was only 24 years old and not producing a good cone crop. So last winter will remain in my memory as our crossbill winter, my first ever in the 41 years I have lived on our central Pennsylvania mountaintop.