Home » Biologists in the Field » A Wild Resource Festival

Thunder rumbled ominously as my husband Bruce and I rushed to join Dr. Jim Bissell on a Dune Walk at Presque Isle State Park.  Under a lowering sky spitting rain, we waited anxiously at Beach 10 Parking Area.  Cars pulled in and out, but no one arrived for the 10:00 a.m. field trip.  Then, Bissell drove up, leaping from his truck with his storied enthusiasm.  A few minutes later, one other person joined us.  She was a native of the Erie-area and was as eager as we were to learn more about the plants from a renowned expert.

Undeterred by the weather or scarcity of participants, Bissell, who is Curator of Botany and Coordinator of Natural Areas at the Cleveland Museum of Natural History, launched into what turned out to be a two hour mini-course on the dune and sand plain plants of the park.  Since 1984 he has been researching and mapping the flora of Presque Isle State Park and has found 80 Pennsylvania threatened, rare, or endangered plants there.

“You can barely go anywhere without finding a rare species,” he told us.

And sure enough, we barely moved from one area, yet he showed us several rare and interesting plants.

The major dune builder now is American beachgrass, a Pennsylvania threatened species which is endemic to the Great Lakes — Ammophila breviligulata ssp.champlainensis— although some botanists consider it a distinct species and call it A. champlainensis.  Originally native to the shores of Lake Ontario and Lake Champlain, the breakwaters erected on the western side of Presque Isle to protect the beaches created larger dunes and greatly increased American beachgrass at the park, Bissell said.

This species differs from the Atlantic coast species because it blooms in late June and produces much longer spikes in late August and early September.  Its undisputed genus name Ammophila is Greek for “sand lover” and usually grows on the first line of coastal sand dunes.  Its creeping rhizomes spread rapidly and thus it can flourish on shifting sands and withstand high winds.

Another plant Bissell showed us was coastal little bluestem or seaside bluestem Schizachyrium scoparium var. littorale, which only grows in Pennsylvania at Presque Isle State Park, even though it lives on sand dunes throughout the Great Lakes’ area. This species is one of many Presque Isle species listed as Pennsylvania rare by the Pennsylvania Biological Survey.

Beach wormwood or mugwort (Artemisia campestris ssp. caudata), another coastal dune species that is related to western sagebrush, is listed as Pennsylvania endangered.  So too is hairy puccoon (Lithospermum caroliniense), still another plant found only at Presque Isle in Pennsylvania.  Known also as hispid gromwell and golden puccoon, it displays clusters of one-inch, yellow-orange flowers in mid-May.

A species that Bissell couldn’t show us is bearberry manzanita (Arctostaphylos uvba-ursi), also called kinnikinick, mealberry, hog cranberry, and sandberry.  This circumpolar species that grows in northern Europe, Asia, and North America is now extinct in Pennsylvania even though it was common on Presque Isle back in the 1930s.  A lovely, evergreen, prostrate ground cover shrub, it has white, urn-shaped flowers in spring and bears bright red berries in late summer.  Bissell blames its demise on deer which “outdo breakwaters in terms of damage” to plant species.

Back in 1949, O.E. Jennings, a botanist and former director of the Carnegie Museum in Pittsburgh, writing in the Pennsylvania Park News, discussed what he called the “bearberry heath” at Presque Isle State Park and added that, “unfortunately there are now too many deer and the bearberry and many other plants of the unusually varied flora of the peninsula are being exterminated.” In 1987, speaking in front of the Presque Isle State Park Authority, Bissell also warned about deer damage especially to hairy puccoon, beach mugwort, and wild blue lupine (also Pennsylvania rare), but he said that “the exotics [invasives] really are the greatest threat in the park.”

Twenty-three years later he reiterated that same message to us and mentioned the same invasive he had warned about then—phragmites or common reed (Phragmites australis)—a widely distributed clonal grass that grows on every continent but Antarctica.  In Europe, it’s protected because of its important ecological functions.  In the United States, it is considered a threat to native wetland plants.  At Presque Isle, it competes with a host of threatened, rare, and endangered species.

Phragmites can grow 13 feet high, and its large flower plumes, which persist into winter, are filled with seeds.  Worst of all, though, Bissell said, are its incredible rhizomes or lateral roots.  They can grow 60 feet in a year, with new plants sprouting at each node, and when they are removed, they will recover in a few months.

We have been coming to Presque Isle State Park periodically since 1983, and on every visit, we are struck by how phragmites has spread on the peninsula.  Usually our botanical host is Evelyn Anderson who writes “Nature’s Way” for the Erie Morning News.  She has shown us dozens of rare and unusual plants growing in the six ecological zones of this seven-mile-long recurving sandspit.  Much of what she has learned has come from her association with Bissell so I was pleased finally to meet and learn from him, if only for a few hours.

The Dune Walk was one of several field trips offered at the Wild Resource Festival last May 1. As a member of Pennsylvania’s Wild Resource Conservation Program’s Advisory Committee, I had wanted to attend one of these nature-oriented events, which first began in 2005.  I was also curious to see the Tom Ridge Environmental Center at the park.

I remember the beginning of what was then called the Wild Resource Conservation Fund back in 1982.  That’s when Governor Dick Thornburgh signed the Pennsylvania Wild Resource Conservation Act, designed to support the management and protection of non-game wildlife and native wild plants and funded by citizens’ voluntary donations of part or all of their state income tax refund. 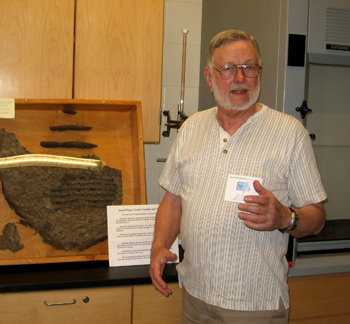 My filing cabinet contains all the issues of the WRCF’s Keystone Wild Notes from volume 1, number 1 published in the summer of 1985 until the Fall/Winter issue of 2007.  Since then this little publication, crammed full of information about the many funded projects, such as the otter reintroduction, fisher reintroduction, study of freshwater mussels, the breeding bird atlas, etc., has been published online.  The latest edition features pieces about the energy challenges ahead and how they will affect Pennsylvania’s natural world.

Today, the WRCF has been renamed the Wild Resource Conservation Program and is administered by the DCNR.  It is financed not only by state income tax refunds, but also by Growing Greener grants and public contributions.  Although they continue the work of studying and conserving our rare species and habitats, they have now “a special emphasis on helping our species and natural systems survive global climate change,” according to their website.  “We are Pennsylvania’s biodiversity conservation program,” and they work closely with the Pennsylvania Game Commission and the Pennsylvania Fish and Boat Commission to conserve Pennsylvania’s non-game animals, wild plants and their habitats.  The needs are great, but the funding is dwindling even as Pennsylvania’s natural world faces more problems than it did when the WRCF was started.

The weather had worsened and the festival’s afternoon bird field trip to Gull Point was cancelled.  But over a thousand people, mostly families with children, visited the many exhibitors set up in the 65,000-square foot, state-of-the-art, green-designed Tom Ridge Environmental Center (TREC).  In addition to permanent exhibitions that feature Presque Isle’s history, ecosystems, wildlife, plants, and bird migrations, TREC has five classrooms and eight laboratories for research and educational programs.  It also houses the Regional Science Consortium, a collaborative, non-profit organization that focuses on and coordinates research and educational projects for Lake Erie and the upper Ohio basin, such as migratory bird night flights, invasive plants and animals, and local bat populations.

The Regional Science Consortium, along with Gannon University, Presque Isle State Park, and TREC were partners with the WRCP in presenting the Wild Resource Festival.  The exhibitors came from a range of state government, non-governmental organizations, and museums.

We were struck particularly by the number of enthusiastic volunteers displaying examples of pressed specimens they had photocopied and mounted of some of the rare plants and invasives from the TREC Natural History Museum.

“We are the invasive capitol of Pennsylvania,” one volunteer said.

Another volunteer, Bob Harris, a retired engineer who looks much younger than his 78 years, took us back to the laboratory area to show us the social wasp display he had designed and constructed as well as other examples of his work.  He also gave us a tour of the Aquatics Lab.  Clearly, he and the other volunteers we spoke with are proud of TREC and devote many hours to it.

As usual, the most popular exhibitor was Chris Urban of the Pennsylvania Fish and Boat Commission who had live rattlesnakes and turtles, including the endangered bog turtle, on display. The crowd was so dense that I could barely get a glimpse of the creatures.

John Rawlins, also on the WRCP Advisory Committee, and Robert L. Davidson of the Carnegie Museum of Natural History showed off rare insects and encouraged folks to bring insects for them to identify.  Mark Klinger, also of the Carnegie, displayed local butterflies and offered a Butterfly Walk.  Tom Erdman and Tim Taylor of the Pennsylvania Bureau of Forestry helped folks identify trees and answered forestry questions.  We especially liked their wildflower picture display and nice guide books. Other knowledgeable people presented material for kids and adults on prehistoric animals, the American chestnut restoration, composting first-hand for kids, the Climate Change Vulnerability Index, and more. 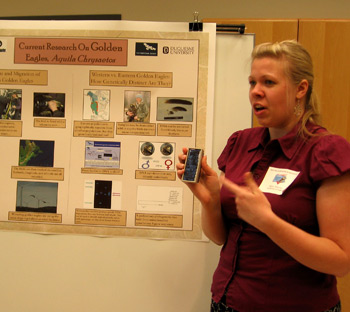 Overall, we enjoyed our first Wild Resource Festival and urge anyone interested in nature and conservation to attend this year’s festival at Point State Park in Pittsburgh on October 15.