Isn’t it funny?  I started to write to you yesterday afternoon, but as far as I got was the heading, ‘Dear Daddy-Long-Legs,’ and then I remembered I’d promised to pick some blackberries for supper, so I went off and left the sheet lying on the table, and when I came back, what do you think I found sitting in the middle of the page?  A real true Daddy-Long-Legs!

I picked him up very gently by one leg, and dropped him out of the window.  I wouldn’t hurt one of them for the world.  They always remind me of you.”

That is what the orphan Judy writes to an anonymous benefactor who is sending her to college in the novel Daddy-Long-Legs by Jean Webster.  Because Judy catches a glimpse of a long-legged man leaving the orphanage office just before she learns of her good fortune, she nicknames him Daddy-Long-legs.  His only request is that she writes him occasional letters, which reach him through a third person, about her college experience.

As a sentimental teenager, I greatly enjoyed this old-fashioned romance written in 1912.  That may be why I, like Judy, wouldn’t hurt a daddy long-legs either.  Whenever one crawls over me, I watch fascinated as it deftly uses its four pairs of long, thread-like legs to propel itself forward.

Usually, daddy long-legs appear on our veranda in late September and early October during harvest time, which is why another common name for one is “harvestman.”  Most visitors shudder and assume they are giant spiders.  They are not reassured when I tell them they are not.  Like spiders, they have their own Order in the animal class Arachnida.  Spiders are in the Order Aranae; daddy long-legs are in the Order Opiliones, so they are also known as “opilionids.”

“Opilio” in Latin means “shepherd,” and experts say taxonomists chose that name because daddy long-legs look as if they are walking on stilts just as European shepherds used to do so that they could more easily oversee their flocks. At least 6,400 species have been identified in the Order, but there may be more than 10,000.  Although there are four suborders, the slender, long-legged, delicate harvestmen in temperate regions are in the suborder Eupnoi.

These are incredibly ancient creatures.  Well-preserved fossils have been found in 400 million-year-old rocks.  Those preserved in the Rhynie cherts of Scotland look modern despite their age.  Not only have they not changed much over the eons, but also species have been restricted to small regions because they don’t disperse farther than 50 miles.  These ancient arachnids are probably most closely related to scorpions, pseudoscorpions, and solifugeae, which include wind scorpions and camel spiders.

Their heads, thoraxes, and abdomens grow together to form compact, oblong bodies, usually no longer than 5/16th of an inch, that come in hues of brown, if they are mostly nocturnal, or yellow, green, or reddish-brown if they are diurnal species.  They have a knob or black turret on top of their heads with a tiny eye on each side that can detect movement several feet away.  But they use their second pair of legs, which are longer than the others, as antennae to explore, search for food, and warn of danger. In front and to the sides of their eyes are two pores from which a chemical scent is emitted that deter large predators and ants.  Beneath their bodies, they have a pair of pedipalps or pincers with which they grasp, tear, and stuff food in their mouths, fight other harvestmen, and clean their legs.

They can easily discard a leg if it is caught and grow a new one.  The detached leg twitches in some species for a minute, in other species for as long as an hour.  In order to move, they have so-called “pacemakers” in the end of the first long section or femur of their seven-jointed legs that sends signals through nerves to the muscles in their legs to stretch.  Between signals the legs rest.  Some researchers believe that the twitching leg keeps a potential predator occupied while the daddy long-legs escapes.

Birds, mammals, amphibians and spiders, some of which are not deterred by their chemical defense, prey on them.  Thus, some species of daddy long-legs may defend themselves by gluing debris on their bodies or by playing dead.

They, in turn, are omnivorous and eat small insects, plant material and fungi.  Some species are scavengers that specialize in dead creatures, bird dung and other feces.  Most ambush their prey and, unlike other arachnids, which must liquefy their prey before ingesting it, daddy long-legs can eat chunks of food.

In late summer and early autumn, after most daddy long-legs’ species have gone through six nymphal stages, they are ready to mate.  It is then that they emerge from their usual habitat under leaf litter, logs and rocks in damp forests to search for mates.  After mating, the female may lay her eggs immediately or wait for months.  The smaller male drives away rivals while she lays eggs a few at a time in soil or under rotten wood until nothing is left of her but an empty shell.  Only one known daddy long-legs’ species in eastern North America hibernates as an adult.  The rest die and leave their eggs to hatch into new daddy long-legs the following spring.

The other early autumn charismatic (to me) invertebrate is the walkingstick, distant cousin of crickets and (ugh!) cockroaches.  Walkingsticks belong to the Phasmatodea or Phasmida Order of insects, which includes European stick insects, walkingsticks, and leaf insects, among others.  “Phasma” comes from the Greek meaning “phantom” because their resemblance to sticks or leaves makes them difficult to see.  But when they appear on our white board house or on our screens, as they do in October, their stick-like bodies always impress me.

I’m not the only person who finds walkingsticks intriguing.  Some people keep them as pets, the most popular being the Indian stick insect — Carausius morosus — because it (or rather she) eats a wide variety of easily obtainable foods such as lettuce and privet and thrives at room temperature.  Also, that species consists only of females that reproduce by parthenogenesis and easily lay fertile eggs.

But most likely, the walkingsticks I see every year are northern walkingsticks Diapheromera femorata, also known as “stickbugs,” “specters,” “prairie alligators,” “devil’s horses,” “witches horses,” and “devil’s darning needles,” among other quaint names.

Although I’ve never noticed any harm from these insects, they are defoliators of deciduous trees in the eastern half of the United States and Canada.  As young nymphs, they eat a wide variety of low-growing shrubs such as rose, juneberry, sweet fern, blueberry and strawberry.  As older nymphs and adults, they prefer the leaves of black oak species, basswood and wild cherry but will also eat quaking aspen, paper birch, hickory, locust and apple tree leaves.  However, this species does not fly and so even a stream or road will stop their spread.  Two parasitic flies — Biomya genalis and Phasmophaga antennalis — destroy the nymphs.  The former lays its eggs on a walkingstick nymph that hatches and eats the nymph, but the latter lays its eggs on foliage that a nymph eats.

The northern walkingstick, like daddy long-legs, mates in late summer, and the female continues laying up to 150 black and white eggs that look like miniature beans, three every day, until cold weather arrives.  She drops them wherever she happens to be on a tree, and they fall to the ground.  The eggs overwinter in the leaf litter and stay unhatched through the following spring, summer, autumn, and winter, only hatching into pale green miniature adults the next year in May or early June.

Northern walkingsticks go through six larval instars before maturing in late July or early August.  The female is larger than the male — 2 ½ to 3 ½ inches long — and he is brown and she is greenish-brown.  Both have long antennae that are two thirds the length of their bodies.

To defend themselves, the young nymphs drop to the ground or jerk back-and-forth, but the older ones and adults remain still, stretching their front legs beside their antennae so that they look even more like harmless twigs.  They sometimes release a bad-smelling liquid too. Birds, such as common grackles, blue jays, wild turkeys, American crows, American robins, white-breasted nuthatches and Carolina chickadees, often prey on them, especially during an infestation when they are more noticeable. Five-lined skinks, Chinese mantids, white-footed mice, eastern chipmunks, and eastern gray squirrels also find them tasty.

With more than 3000 species worldwide, most of which live in the tropics, walkingstick life histories are diverse.  For instance, Eurycantha horrida (its species’ name hints at its ferociousness), has large spines on its hind legs that it uses to defend itself and to compete with other males. Some species, like the southern United States species, the American or two-lined walkingstick (Anisomorpha buprestoides), have defensive glands and spray a noxious chemical that repels birds and other insects, not to mention curious entomologists like Thomas Eisner who describes the spray as a “fine mist”  that had a piercing stench.  “My eyes hurt, as did my lungs when I got a whiff.  This was evil stuff.  I started coughing,” he writes in his book For Love of Insects.  The species is nicknamed “musk mare” and “devil’s rider,” because the small male spends much of his time astride the much larger female.  “They are not necessarily mating when thus found,” Eisner writes, “although the pairing is sexual, and the two do eventually mate and produce eggs.” 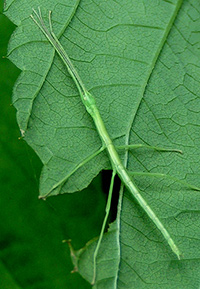 Many stick insects that drop their eggs on the ground, including the northern walkingstick, have eggs with a large food body called a capitulum, which contains substances attractive to ants, similar to some plants that have food bodies called “eliasomes” on their seeds to entice ants to take them back to their nests so they will have a more fruitful place to germinate and grow.  In the case of stick-insects, the ants take the eggs back to their nests, cut off the capitulums, and feed them to their brood.  Then the ants discard the rest of the eggs in their garbage, where they will hatch and live in the ant nest, safe from predators.  Some species are even ant mimics.

Luckily, northern walkingsticks have never released a bad-smelling liquid when I pick them up, as I do with the daddy long-legs, and show them off to visitors.  Youngsters are particularly intrigued by both of them.  Then I place the northern walkingstick on a tree to demonstrate its excellent camouflage, and put the daddy long-legs back in the woods, knowing that both critters will soon be dying as the season of warmth ends.

All daddy long-legs photos taken on the mountain by Dave. Please click the walkingstick photos to see the larger originals on Flickr.