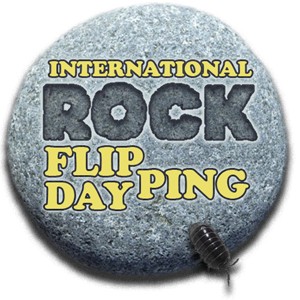 Never underestimate the power of the Internet. That’s what I thought last Labor Day weekend when folks from around the world participated in International Rock-Flipping Day.

You say you’ve never heard of such a day? Well, neither had anyone else before August 22. That was the day our son Dave announced it on his literary blog Via Negativa. Another blogging friend, Fred Garber of Factory Town in Iowa, suggested it. Dave e-mailed Bev Wigney from Ontario who maintains an excellent blog — Burning Silo — that often concerns itself with the insect world. She agreed to help promote the idea, and Jason Robertshaw of Cephalopodcast in Florida designed a handsome badge for the event complete with a pill bug.

The rules were minimal. Flip over rocks and record, with camera and pen, what was beneath. Then return the rocks to their original positions. Send in photographic results to a Flickr Group pool or to Bev and/or Dave. They would also promote links to any blogs that covered the event. In addition, Dave offered a “grand prize” to anyone who photographed an animal flipping rocks. He figured that no one would score. How wrong he was.

“The point,” Dave wrote, “is to have fun, and hopefully learn something at the same time.”

Photos, videos, poems, and essays poured in the day after the event. Altogether, bloggers from 14 states, eight countries, and four continents posted their results online, providing hours of entertainment for everyone who participated and those who read their blogs.

Sharon Brogan of Watermark: A Poet’s Notebook from Montana wrote a serious poem that began:

For years I sat with people as they
turned over boulders in their hearts.
Millipedes, centipedes, scorpions;
snakes and roots and cockroaches.

Silvia of Windywillow from Ireland was more irreverent. “This is flippin’ great fun!” And she found a wood louse, worm, slug, and crane fly.

Tai Haku of Earth, Wind, and Water from somewhere in the Caribbean, who describes himself as a “scuba-diving, tree-planting, bird-photographing nature fan living and blogging in a tropical paradise,” went into the rainforest to flip rocks. He found an “elegant-looking cricket and a giant millipede” and added that “Questing through the forest gave us a good excuse to scale the island’s highest peak and also gifted us with three other great sightings of animals not under rocks: an Antillean Racer, a pair of beautiful Red-tailed Hawks and nicest of all bird tick #74 — a Bridled Quail Dove ambling through the forest.”

Rose Connors of Fate, Felicity, or Fluke looked under rocks in an Oregon tide pool and posted striking photos of a starfish, sea anemone, purple crab, sea snails, and mussels.

Bev Wigney discovered mating millipedes and a woolly bear caterpillar with its newly-molted husk nearby. Pablo at Roundrock Journal in the Missouri Ozarks turned over his first rock and carefully photographed the coiled northern copperhead beneath it.

And there was a grand prize winner — Fred First of Fragments from Floyd who photographed a raccoon flipping rocks in southwest Virginia’s Goose Creek.

Here on Brush Mountain we tried several different approaches to rock-flipping. Early in the morning, Dave flipped a rock on our scrub barrens habitat of lowbush blueberries and huckleberries, scrub oak, mountain laurel, sweetfern and bracken on our small, hundred-year-old, powerline right-of-way. What he found was a handsome, coiled, red and black Narceus millipede, in his words a “superabundant composter of forest litter throughout the northeast, where they apparently serve as a significant reservoir of calcium and phosphorous in otherwise acid, well-drained mountaintop soils.”

In mid-morning, Dave and I sallied forth with our ultimate weapons, two enthusiastic seven-year-olds — my great niece Morgan and her best friend Devon. Our plan was to flip rocks in and next to our barely-flowing stream.

wood frog found under a rock beside Plummer's Hollow Run

Both children plunged in, turning over rocks, and after an hour and a half, we had compiled a pretty good list — several northern dusky salamanders, a wood frog, mountain dusky salamander, ground beetle, crayfish, and earthworm, which circled Morgan’s thumb to her great delight. Under rocks on our dry road bank, we uncovered tiny ants guarding their eggs.

Unfortunately, the kids’ attention flagged sooner than mine did. While I continued compulsively flipping rocks, they climbed up and down the road bank in search of wild mushrooms. Devon, who is a devotee of the Food Network, was desperate to eat them, but I told him we could only do so if we found chicken mushrooms.

In that way, rock-flipping metamorphosed into mushroom-hunting. We had no luck that morning and, as promised, I took them up to the spruce grove for a picnic lunch. This is Morgan’s favorite place and she wanted to share it with Devon.

“What is this peaceful place?” Devon asked about the dark, cool, and quiet spruce grove. Child of the New Jersey suburbs, he had never been so far from the sidewalks. He kept relating his experience here to computer games and television shows and I, who have neither played computer games nor owned a television, had no idea what he was talking about. His other passion was race cars, a passion he shares with his father and one that I have absolutely no affinity for.

When we found many inedible mushrooms under the spruces, Devon kept picking and throwing them with boyish bravado. He also collected a deer leg bone there with true reverence. Morgan tried to play house with him as she often has with me, using natural materials to stimulate her incredibly active imagination. But Devon was having none of it.

Finally, we headed down to our house via our wooded trails. Once we stopped to pull apart a rotten log and found a northern slimy salamander, a species I had hoped to find during our rock-flipping morning. I picked it up, admired its handsome, white-spotted black body, and showed the children the sticky residue it left on my hand. As a salamander-lover, I found it difficult to accept their refusal to pick up that salamander and the many we had found during our rock-flipping morning. They also wouldn’t hold any of the crayfish we uncovered, although Devon had delighted in actually finding crayfish burrows under the rocks.

Devon, who possessed more energy than balance fell and bounced back up several times as he climbed fallen trees, swung from low branches, and ran full-tilt down the trails. Once, Morgan ran after him, tripped, and fell. Because she was close to crying, we sat on a log to rest. I glanced casually over into the woods and on a large, fallen tree trunk, I saw them.

“Chicken mushrooms,” I shouted, and Morgan, forgetting her upset, ran as fast as Devon and I to harvest what turned out to be ten pounds of bright orange and yellow chicken mushrooms. I filled my large backpack with them, and an enthusiastic Devon, bent beneath the load, proudly hauled the pack on his back to the house.

Before dinner, Dave orchestrated the Flipping of the Bridge with the help of my husband Bruce and the back hoe on our tractor. Back in 1994, Bruce had bashed the ten-inch-thick, four-foot-long Juniata sandstone from our road and Dave had installed it with the tractor’s help, dropping the rock over the drainage ditch as a bridge from our lawn to the driveway. Dave wanted to see what was under it.

We all stood breathless and watching — Devon, Morgan, our niece Heidi and husband Jeff — as Bruce clawed the rock loose with the tractor’s backhoe and turned it on end.

Mud, thick, dark, and wet, was all we saw. And then Dave lay down on his belly and looked underneath. Something moved. A northern fall field cricket — Gryllus pennsylvanicus — clung to the underside of the rock. But the big machine impressed the children much more than the cricket, especially when Bruce gave Devon a ride.

For dinner, Dave sautéed the chicken mushrooms with fresh green peppers and served them in a delicious sauce as a side dish, making Devon, who ate like a horse, supremely happy.

So our rock-flipping day was a gastronomic treat as well and wild and woolly from beginning to end.

Annie of The Transplantable Rose in Austin, Texas, who found earwigs, cutworms, earthworms, a millipede, ants and ant eggs, summed up the experience for all of us with some light verse:

Flipping rocks and flipping stones,
Whatcha think we found there?
It can be a big surprise
What’s living in the ground there!

Marcia holds the slimy salamander she found on IRFD

To find links to all of last year’s entries and to see Dave’s photos of our experience and his account, see here (especially this post). To see the dozens of photos posted by many of the participants, visit the International Rock-Flipping Day Group on Flickr.

This year International Rock-Flipping Day is set for September 7, and we encourage everyone who is interested to participate. We especially urge you to take a kid or two along. (Public school classes that wish to participate may celebrate IRFD two days early, on September 5.) As Pete McGregor of Pohanginapete in New Zealand wrote, “I acknowledge how important rock flipping used to be to me, and how exciting it is for kids in particular. Have you ever noticed how, in a child’s mind, the larger the rock the more wonderful the things that must live beneath it?”