Home » Biologists in the Field » In Search of Nature 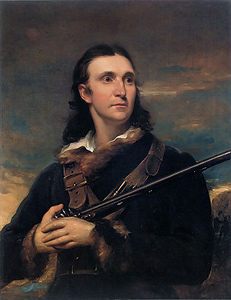 “It’s too darned hot,” I said on our 45th wedding anniversary. The temperature was heading into the high, humid nineties so we shelved our plan to take a hike.

Instead, we followed Plan B and on a late August morning, my husband Bruce and I drove to the Ned Smith Center for Nature and Art in Millersburg, along the eastern side of the Susquehanna River. Named in honor of Millersburg resident, wildlife artist, naturalist and writer Ned Smith, the Center was founded in 1993 “to merge the arts and the natural world and foster a celebration of both,” according to their mission statement.

We were eager to see what was billed as “the largest exhibition of John James Audubon’s artwork ever to appear in central Pennsylvania.”  As someone who has written extensively about the history of natural history, especially in Pennsylvania, I was curious to see what material had been included in an exhibition at their new Olewine Gallery entitled “The Mysterious John James Audubon.”

Years ago, I had visited John James Audubon’s first home in America called “Mill Grove,” “a home,” his granddaughter Maria wrote, “He always loved and never spoke of without deep feeling.” His French father, who owned the property, sent Audubon there to escape the Napoleonic Wars.

Located in eastern Pennsylvania along the Upper Perkiomen Creek in Montgomery County, it was there that Audubon began what he called his “simple and agreeable studies” of birds, learning to draw them from nature by shooting and then immediately mounting them on blocks of wood with the help of wires that held them up in lifelike positions.  As part of his work, he banded the first birds in North America by tying silver threads around the legs of eastern phoebes nesting in a rock cave along the Perkiomen and was delighted when they returned the following year. 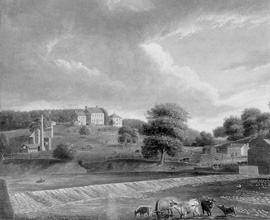 He lived at Mill Grove a scant three years from 1804 until 1807, but in that time he met his future wife, a neighboring woman named Lucy Bakewell and began his lifelong love affair with the birds of North America. Because his wife’s family continued to live along the Perkiomen, Audubon often returned to Pennsylvania to visit.

Built of Pennsylvania fieldstone, the farmhouse was and still is a treasure house of Audubon’s paintings. Now leased by the National Audubon Society from Montgomery County, which purchased the house and grounds back in 1951, it has been renamed the John James Audubon Center at Mill Grove.  Several of Audubon’s paintings at Mill Grove were lent to the Ned Smith Center for display, including the massive oil painting “The Eagle and the Lamb,” painted in 1828 when he was in England.  So too were all four volumes of his massive Birds of North America.

I was especially interested in paintings he had done based on his research and travels in Pennsylvania.  One was Vigor’s vireo, named for British naturalist Nicholas Vigors, which he had collected at Mill Grove and painted several decades later.  But as it does for many birdwatchers today, the immature plumage of a pine warbler that he had previously painted in mature plumage had confused him.  In May 1808, he collected two male chestnut-sided warblers near Pottstown and later painted them on moth mullein.  Another bird he purportedly painted in Pennsylvania in 1824 was one of his favorites — our state bird the “ruffed grous.” 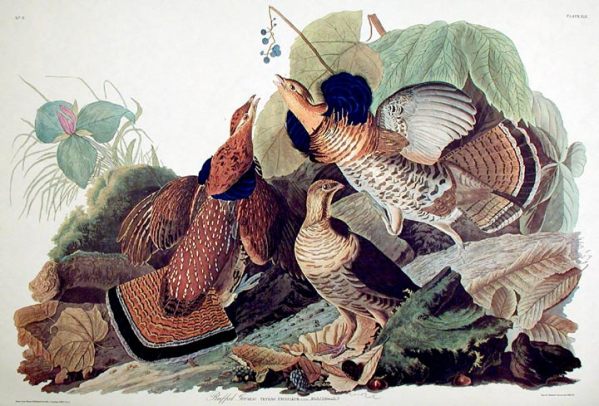 But he made his largest collecting trip in Pennsylvania in the late summer and early autumn of 1829 when he spent six weeks in what he called the “Great Pine Forest — Swamp it cannot be called” of the Upper Lehigh River “where I made many a drawing.”  He lived in the home of logger Jediah Irish and his family and ate “juicy venison, excellent bear flesh and delightful trout.”  However, he was distressed to see that “Trees, one after another, were… constantly heard falling during the days, and in calm nights, the greedy mills told the sad tale that in a century the noble forests around should exist no more.”  Nevertheless, he painted more than 90 birds for his Birds of North America because of his trip including the red-breasted nuthatch, pileated woodpecker in a wild grape tangle, and common ravens.

Near the end of his life, his focus turned to mammals and he produced, with the help of his sons and friends, The Viviparous Quadrupeds of North America. Several prints from that collection hung on the walls of the Olewine Gallery including “Pennant’s marten,” which we call the fisher.  The painting portrays a live fisher that had been captured on nearby Peter’s Mountain in Dauphin County and sent to Audubon by 21-year-old Spencer Fullerton Baird, a protégé of Audubon.

“It seems in very good health,” Audubon wrote, “and is without exception the most unmitigatedly savage beast I ever saw…”

Most people have heard of John James Audubon.  Fewer know of or remember Spencer Fullerton Baird.  Yet he was one of several well-known Pennsylvania naturalists of the eighteenth and nineteenth centuries.  Born in Reading in 1823, his widowed mother moved her seven children to Carlisle, where she had family, when Baird was ten years old. Baird and his older brother William roamed the Cumberland Valley and, in 1838, Baird began a journal in which he listed various birds and recorded the weather.

The following year he corresponded with Audubon. “You see sir, I have taken (after much hesitation) the liberty of writing to you.  I am but a boy, and very inexperienced, as you no doubt will observe from my description of the Flycatcher.”  The flycatcher turned out to be one of two flycatchers discovered by Baird — the yellow-bellied and least flycatchers.

Audubon responded enthusiastically, writing “Although you speak of yourself as being a youth, your style and the descriptions you have sent me prove to me that an old head may from time to time be found on young shoulders.”  Perhaps, Audubon was reminded of the lament he wrote after his time in the Lehigh River area when he wondered why young men didn’t “occupy themselves in contemplating the rich profusion which nature has poured around them…But, alas, no! They are none of them aware of the richness of the Great Pine Swamp…” In Baird, he had found his “dear young friend” and as “a young naturalist of eminent attainments,” as Audubon described him in The Viviparous Quadrupeds of North America, Baird began collecting specimens for the book, sending Audubon a “common American wildcat” or bobcat he had shot a mile and a quarter from Carlisle that was two-and-a-half-feet long and weighed twelve-and-a-half pounds. 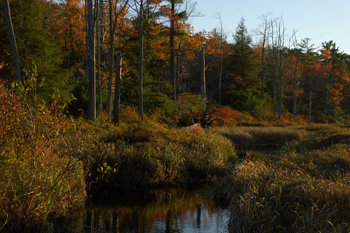 But Baird also made his own collection of birds and mammals mostly on foot. In June 1842, he took a marathon walking trip along the Susquehanna Valley and stayed with various families along the way.  He began by walking from Carlisle to Mifflin, then on to Lewistown and Stone Valley in Huntingdon County.  From there he “Went over to Bear Meadows [now a state natural area in Rothrock State Forest] 9 miles off, being a meadow on top of a Mountain so Boggy that you can thrust a stick through the roots and moss 15 feet.  The place is filled in most places with a dense growth of Rhododendron, Hemlock, Black Spruce, Tamarack, etc.  It contains many very curious and beautiful flowers,” which is still an apt description of the place today.

Continuing his walk, Baird visited the Andrew Curtins (of iron furnace fame) in Bellefonte where he saw a pair of Bewick’s wrens (now gone from Pennsylvania). Then he walked back to the Susquehanna River where he crossed over to Northumberland to visit Joseph Priestley “whom I found very clever.”  On he went to see a coal mine in Wilkes Barre and then back to Northumberland. From there he walked home in one day covering 60 miles in 15 hours.

“Lost 12 pounds of flesh, and burnt to the color of old Aunt Rachel. Walked in a Blouse Check shirt, Beaverteen Pants, Heavy shoes and cap. Carried Knapsack and Gun,” he wrote to his brother William. In all he walked 2100 miles that year. 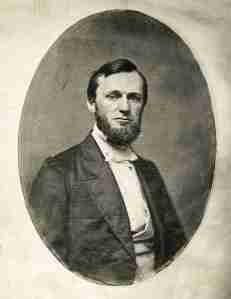 A graduate of Dickinson College, he received a full professorship in natural history there in 1846. He introduced for the first time in America field excursions to his zoology and botany classes. Known affectionately as “The Prof” by his students, he continued his collecting and moved his collections from his mother’s overflowing shed to Dickinson College.

In the next 37 years of his life, he published over 1000 papers and books including Mammals of America and the Birds of North America. He added hundreds of new species to every branch of natural science, for instance, he increased the known number of mammals by 25% as he classified the material shipped to him from all over the country.

He started the United States Fish Commission in 1871 in response to enquiries about the decline of fish along the eastern coast of North America. Later he was named fish culturist of the world by the Germans and his research led to the eventual establishment of research facilities at Wood’s Hole, Massachusetts. Like Pennsylvania native Rachel Carson, who later studied at Wood’s Hole, Baird seemed to be fond of the ocean.

In 1878, Joseph Henry died and Baird became the Second Secretary of the Smithsonian and retained the title of Fish Commissioner. But after nine years at the helm of the Smithsonian, he resigned and died two months later at Wood’s Hole.

Modest, kind, gentle and sympathetic, the boy naturalist from Pennsylvania had become one of the most renowned scientists of the nineteenth century. As one biologist later wrote, “He had made the hills and streams of Pennsylvania his laboratory and he walked with Audubon.” 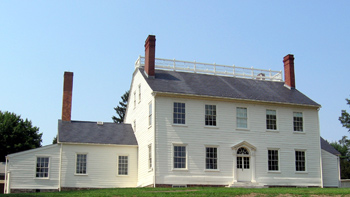 Like Baird, we finished our day by driving (instead of walking) up the winding, scenic highway along the eastern side of the Susquehanna River to Northumberland to visit the well-preserved home of the Rev. Dr. Joseph Priestley. In 1799 Priestley, a Unitarian minister from England credited with the discovery of oxygen, fled to America to escape prosecution for his theological and political views. There he isolated carbon monoxide in his Northumberland home before dying in 1804. No doubt, Baird had visited his grandson, also named Joseph, during his monumental walking tour.

Although the homes of the Englishman Priestley and Frenchman Audubon, neither of whom lived very long in Pennsylvania, are well-preserved and open to the public, no such monument exists for Spencer Fullerton Baird in his home state.  But every time I visit the Smithsonian, I am reminded of Spencer Fullerton Baird and his selfless life devoted to the discovery and study of North America’s natural heritage.
__________

All three places are open to the public and have special programs for adults and children.

Thanks to lemonad (Jonas Nockert) for licencing his photo with a Creative Commons licence. (See all the photos in his Rothrock State Forest set.)