This is the time of year when essence of skunk sometimes reaches my nostrils as I wander over our mountain. That’s because March is prime mating season, and male striped skunks are abroad looking for receptive females.

The females are still holed up in their communal winter dens six feet underground, and sometimes one lucky male has spent the winter with as many as 11 females. In fact, a Pennsylvania den holds the all time record of 18 females.

“He secures rights to this harem,” says Luanne Johnson, who has been studying the striped skunks of Martha’s Vineyard since 2004.

Most males, though, den alone and must go from den to den in search of mates. A female skunk is in heat for only four or five days and those that live alone usually mate with several males. If she is already pregnant, she fights off other males, and she raises her young by herself. Although mating can occur any time between mid-February and mid-April, mid-March is the optimum time in Pennsylvania.

In 63 days, more or less, a female striped skunk will have a litter of 2 to 10 young in a den she has either dug herself with her long-clawed forefeet or in an abandoned woodchuck or fox den she has refurbished. The den can be from 6 to 25 feet long and has one to three chambers 12 to 15 inches in diameter lined with dried leaves and grasses.

Although the pups are born blind, helpless, and hairless, their distinctive black and white pattern is already evident beneath their skins. Even before they can see-on average at 22 days of age-they can emit scent. They are weaned when they are six to eight weeks old and follow their mother single file on her nightly hunting forays. By late summer some disperse, but others stay with their mother until the following spring when they can mate.

The striped skunk, Mephitis mephitis, lives in southern Canada from Nova Scotia to British Columbia including the Hudson Bay area, south to Florida, west to California, and into northern Mexico, excluding only corners of the southwest desert where water is scarce. Pennsylvania’s south-central counties of Bedford, Fulton, and Franklin also have a small population of the eastern spotted skunk, Spilogale putorius, but, by and large, the striped skunk, also called “lined skunk,” “polecat,” or “wood pussy” is the common skunk species in Pennsylvania.

Recently, based on DNA studies by Dr. Jerry Dragoo of the University of New Mexico, skunks have been removed from the weasel family Mustelid and placed into its own family Mephitidae, which means “noxious odor,” and includes the nine New World skunk species and two Southeast Asia stink badger species.

Dragoo, affectionately referred to as “Skunk Man,” has little or no sense of smell, so as a mephitologist he can easily study and live with skunks. When he wants one for his research, he chases it down, picks it up by its tail, and is liberally sprayed, because, as skunk expert Richard G. Van Gelder discovered back in the 1960s, you can only grab a skunk by the tail and escape being sprayed if you surprise the animal. Otherwise, it is able to evert its anus and expose the nipples from its huge and squishy scent sacs, which are then ready to fire even if you do pick it up by its tail. Dragoo explains on his website, Dragoo Institute for the Betterment of Skunks and Skunk Reputations, that the spray is either “emitted as an atomized cloud,” which he calls the “‘shotgun’ approach,” or “as a stream directed at the predator’s face…the ‘.357 magnum’ tactic,” with a range of 10 to 15 feet.

But Dragoo, Luanne Johnson, and Travis Quirk, who is studying striped skunks near Manitoba’s Delta Marsh, agree that skunks are timid animals that would rather run and hide than unleash their ultimate weapon. And a skunk will give plenty of warning-stomping its front feet, arching its tail, chattering its teeth, and shuffling backwards– before facing a predator, rapidly twisting its rear end around, and letting loose.

What it lets loose is a barrage of sulphur compounds called thiols, which cling to the victim and continue to release more bad smells as they slowly react with water from the victim’s body over several days. William Wood, a chemist from Humboldt State University in California, studied skunk “perfume” in 1990 and found that previous analyses of it had missed a couple compounds and misidentified two others. In addition, Wood added three new components and a previously unknown chemical to the mix. Best of all, he devised a way to change the chemistry of the spray and render it odorless. Forget tomato juice. It doesn’t work. Instead, mix one quart of 3 percent hydrogen peroxide, a half cup of baking soda, and a tablespoon of liquid dish soap and apply it to the victim, he advises. Quirt and Johnson say it works. 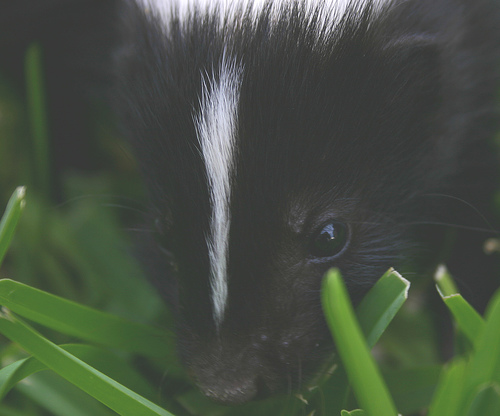 Both of them are studying the eating habits of striped skunks. In addition to the bad rap they get about their smell, skunks are also accused of eating birds’ eggs and chicks. Quirk is concerned primarily with waterfowl losses due to skunks and Johnson with endangered and threatened shorebirds, specifically piping plovers, least terns, and American oystercatchers. But the researchers agree that omnivorous skunks don’t intentionally target birds’ eggs and chicks.

“They don’t seem to go out and hunt them methodically. They’re just ambling down the beach, and they bump into them and then they’ll eat whatever’s in front of them,” Johnson says.

She adds that neither she nor her field assistants have ever seen a striped skunk kill a chick. Since she has ear-tagged 120 skunks and put radio transmitting collars on 49, which she has continually tracked on their nightly rounds, she should know.

Striped skunks, which find food by using their keen sense of smell and hearing, eat just about anything including garbage and carrion. That’s why they thrive in a wide variety of habitats, including lawns and golf courses where they dig up grubs. But they prefer forest edges, old fields, and brushy farmlands where they do more good than harm, eating an incredible diversity of insects such as beetles, crickets, moths, ants, and grasshoppers, and specializing in such harmful to agriculture insects as bud worms, June beetles, army worms, cut worms, and scarab beetles. They dig up yellow jacket nests and scratch on beehives to entice honeybees outside so they can eat them and are seemingly unperturbed by their stings. They also relish spiders, toads, frogs, snakes, young rabbits, chipmunks, shrews, voles, salamanders, crayfish and earthworms.

Striped skunks roll caterpillars on the ground , especially those of the gypsy moth and other hairy or spiny species before they eat them. They do the same with toads. And when they do stumble on the eggs of ground-nesting birds, they roll them between their hind legs until they break on a rock or other hard object.

“They are accomplished mousers,” Johnson says. “If they find them, they will run them down.”

Striped skunks fatten up before winter and sleep through the coldest weather. But their body temperature only drops from 98 to 88 degrees Fahrenheit, and they frequently appear during warm spells. Nevertheless, from November to March, females lose from 32 to 55 percent of their weight and males from 15 to 48 percent. In the winter of 2006, Johnson make an unusual discovery while tracking a yearling male. She found him sharing ” the hollowed out base of an old beech tree with a raccoon for several days…I got the signal on my skunk from the spot, but a little raccoon face was staring out at me. ‘Any port in a storm’ as one of my sailing friends likes to say,” she told me. 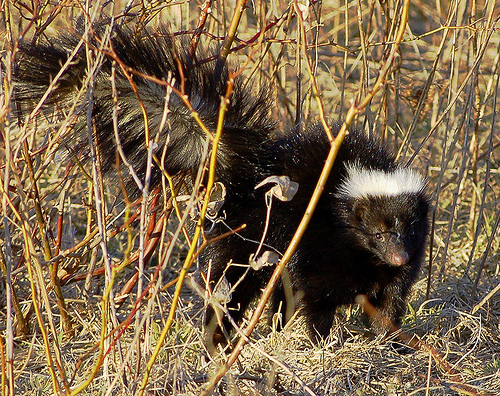 During the summer striped skunks without young often sleep in different spots every night, according to Johnson, such as underneath shrubs, old boats and decks.

“They’re moving around a lot,” she told a reporter for the Martha Vineyard Times, “and a lot of places kind of function as little skunk motels, where skunks will come and go.”

And that’s when they get into trouble with humans because they will sometimes den under outbuildings or homes. Dragoo, the Skunk Man, spends a lot of time relocating such skunks between May and September. Although they rarely release their scent in their dens, he says, it remains in their feces even after they are removed from an inappropriate place.

Great horned owls and barred owls aren’t bothered by skunk musk and are major predators on striped skunks. Eagles, crows, vultures, coyotes, and bobcats also kill them. But automobiles are their biggest killer along with a wide variety of parasites. They are also major carriers of at least two rabies’ variants. For this reason they don’t make good pets.

But they do make excellent study subjects even though they are nocturnal and the researchers must track them at night. That’s how Quirk became a mephitologist. Another researcher refused to work on skunks because nighttime field work made her claustrophobic so Quirk volunteered instead.

It’s worth it though. She constantly makes new discoveries, for instance, that striped skunks travel farther in one night than researchers suspected. A nursing female she tracked made a full three-and-a half mile round trip in her nightly search for food.

Unlike many researchers, Johnson names her skunks because it makes it easier for her to remember them and because she has found that they have different personalities. One is a snoozer; another is wary, but all of them are cute. Quirk, who raised orphan skunks, calls them “sweethearts.”

And Dragoo? Seven research skunks live at his place. Charlie, Bugbane, Stinky Pete, and Rosebud live outside and Siren, Shadow, and OnRey live inside. None of them have had their scent glands removed. One writer, Mark Wheller, who visited Dragoo, was initially wary of them. But he was won over when he was near Dragoo’s inside skunks.

Web-only bonus: Here’s a short video Dave shot of a skunk foraging in the picnic area at Canoe Creek State Park on March 13, 2008.