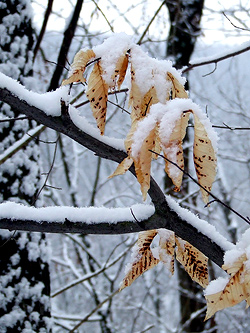 Ghostly leaves of American beech trees sway in February storms like tiny spirits alive in a frozen world.  But only small and medium-sized beech trees hold on to their leaves throughout the winter.

In the fall, I watch the toothed, leathery, single beech leaves turn from green to gold.  Then the gold leaks from them and they become the color of polished brass — a striking contrast to their silver bark.  Most of the leaves sift to the ground in the slightest breeze, but those on smaller beech trees curl up and cling tightly, even as the brass leaks from them, leaving them a brittle, beige-white that catches the weak winter light and sets them glowing like torches among the dark hemlocks.

American beech trees — Fagus grandifolia — gather in silvered clumps, especially in our north-facing hollow.  Over the largest beech trunks lie a patina of lichen green.  Only a couple large tree trunks , with smooth, elephantine-like bark, bear the marks of humans.  But each trunk is unique, displaying its history of lost branches on its skyward way.  Some patterns look like upside down wide smiles, others like triangles.  Large “eyes” keep watch on the world around them.  Still others bear mottled marks.

Most trunks are reasonably straight, but one beech is bent like a contortionist as it reaches for light under the hemlocks.  Another is wrapped from bottom to top by a thick grapevine.

If I look closely on the ground beneath the smaller beech trees, I see what, to untutored eyes, looks like dried, branched stems but are, in reality, the remains of beechdrops (Epifagus virginiana).  These nonphotosynthetic, flowering parasites on beech roots produce small, tubular, dull magenta and pale brown, insect pollinated flowers near the ends of their branches that bloom in September and October.  But the flowers farther down the branches never open and are self-fertilized.  Looking even more closely at the plants, I sometimes see the yellowish, felt-like galls on their tiny leaves constructed by the eriophyid mite (Acalitus fagerinea).

Beech trees themselves are wind-pollinated. But those clumps of trees in our hollow are clones that are the result of root sprouts.  Even though beech trees thrive in the moist soils of valley bottoms and lower slopes, such as our hollow, a clone of small and medium-sized beeches also grows in our upland forest between the spruce grove and the Far Field Road. Because they can reproduce in dense shade, beeches live easily in mature hardwood forests.

From long, thin, “cigar-shaped” buds, as my botany professor described them, stiff, green leaves emerge along zig-zag twigs.  At almost the same time, in April and May, male and female flowers bloom.  The head-shaped clusters of beige male flowers dangle from long green stems while the paired female flowers have short stems and one- quarter-inch, urn-shaped flowers. 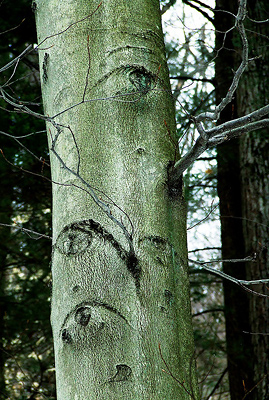 If all goes well and we don’t have a late spring frost, I will find beechnuts on our driveway in October after the first autumnal frosts.  Beech trees must be at least 40 years old to bear a good crop of nuts and those 60 or more are the most prolific.  Back before the eastern forests had been logged, millions of passenger pigeons fed on nuts from old growth trees.

The leaves are tasty to a huge number of caterpillars with charming names such as the spun glass slug, elegant tailed slug, red-eyed button slug, purple-crested slug, the laugher, red-humped oakworm, wavy-lined heterocampa, blinded sphinx, saddled prominent, and the Bruce spanworm, to name a few. The larvae of the more familiar moths — Io, luna, and cecropia — and butterflies — the red-spotted purple (which we have by the dozen in the hollow) and the closely-related white admiral — also feed on the beech leaves. 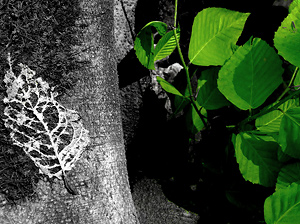 Beech leaves in May

Leaves were valuable to the pioneers who dried them to stuff in their mattresses.  Native Americans boiled leaves and bark to treat frostbite and burns.  They also took an herbal decoction orally for bladder, kidney and liver problems.  Even the bark was valuable in making an ointment to treat sores and ulcers. Rappahannock Indians steeped the bark in saltwater to make a lotion to counteract poison ivy.  Folks in Kentucky were said to use beech sap to treat tuberculosis.  But, for those folks who might be wondering, Beechnut gum contains no beechnut product.

The light-colored, hard and strong beech wood today is used for firewood, furniture veneer, railroad ties, crates, boxes, and paper and early settlers prized it for making charcoal and water wheels. The leaves and bark are popular for fabric dyes now that natural dyes are all the fashion rage.

Although mature beech trees reach a height of 60 to 75 feet and sometimes a trunk diameter of two to three feet, they cannot compare to those described by early North American travelers such as Prince Maximilian of Wied.  Writing from southern Indiana in June of 1833, he recounted that he “came to a tall, gloomy forest, consisting almost wholly of large Beech trees, which afforded a most refreshing shade.  The forest continued without intermission…The lofty crowns of the trees shut out the sky from our view.  They were the most splendid forests I had yet seen in America…”

We’ll never see forests such as those again and, if beech bark disease continues to spread, not even the large trees we see today.  Right now the current champion in Pennsylvania is in Montgomery County with a diameter of 6 feet 8 inches and a height of 87 feet.

So far beech bark disease has not reached our hollow, but it is probably only a matter of time.  Although the beech scale insect first came from Europe on nursery stock to Halifax, Nova Scotia before 1890, it was only after the Second World War that it began to move aggressively south, reaching Pennsylvania in 1958. 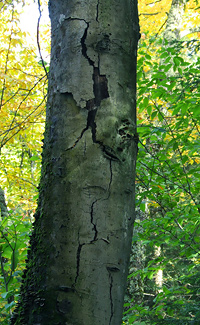 A victim of beech bark disease in the Adirondacks

The beech scale insect Crytococcus fagisuga causes the disease by inserting its needle-like mouthpart into the beech bark and tissues beneath and sucking out the nutrients. This opening allows a native fungal pathogen Nectria coccinea var. faginata to enter it via spores it produces that can be carried by the wind or insects.  The fruiting bodies of the fungus are red and show up easily on the silver beech bark.

If I see a waxy white crust on the trunk of a beech tree, I will know that beech scale insects have reached our hollow.  Under the waxy material produced by the beech scale are the pale yellow insects.  They lay their eggs there in the summer.  Those eggs hatch and the young crawl into bark fissures on their natal tree or move to other trees with the assistance of wind or wildlife.

It may take several years for the fungus to establish itself in scale-infested trees, but when it does, it forms cankers which kill patches of inner bark.  Sometimes cankers expand and join together to girdle and kill a tree by choking off water and nutrients.  Other times a tree will survive the onslaught.  Occasionally trees are resistant to the scale insect.  It is those trees that may provide hope for the future of this beautiful tree.

On the other hand, when beeches regenerate after a scale infection, they usually resprout from the roots of dead trees, instead of from the nuts of resistant trees, and form thickets of small, weak trees genetically the same as those killed by beech scale and liable to succumb again to the disease.

A beech with an unusual, cathedral-style flying buttress

When artist/ornithologist John James Audubon painted a pair of passenger pigeons, he perched them on a beech bough somewhere in Kentucky where he was then living with his wife Lucy.  But he was amazed by the abundance and wholesale slaughter of the pigeons in the beech forests of Kentucky.

“The pigeons, arrived by thousands, alighted everywhere, one above another, until solid masses as large as hogs heads were formed on the branches all round.  Here and there perches gave way under the weight with a crash and, falling to the ground destroyed hundreds of the birds beneath,” Audubon writes. Farmers drove their hogs to feast on the pigeons and “a great number of persons, with horses and wagons, guns and ammunition, had already established encampments on the borders [of the beech forest].”

It’s difficult to imagine such abundance today in our depleted forests. For, as Donald Culross Peattie writes in his classic A Natural History of Trees of Eastern and Central North America, “…two withered beechen leaves [in Audubon’s painting] tell us that the season is autumn when the mast is ripe.  An autumn that will not come again but lingers, immortal, in those leaves that cannot fall.”

All photos are by Dave Bonta, and all were taken in Plummer’s Hollow except the Adirondack beech. Click the photos to see larger versions.