The last time I saw a golden-winged warbler on our property was May 29, 2008, when I heard him singing his “bee, bzz, bzz” song and tracked him to his usual nesting spot at the top edge of First Field.

Of course, that wasn’t the only place I saw golden-winged warblers on our property. But it’s the only place that has remained the same with clusters of black locust saplings, a 37-acre field of goldenrod in front, and upslope a mature mixed hardwood forest. This is ideal golden-wing nesting habitat according to the speakers at a Golden-winged Warbler Weekend I attended last April at Penn State Altoona, which was partially sponsored by Pennsylvania Audubon as well as our own Juniata Valley Audubon Society (JVAS).

Yet so-called ideal golden-wing habitat on both their nesting and wintering grounds has been increasingly empty of these handsome warblers with their black eye patches and throats and yellow foreheads and wing patches. Once they bred throughout the northeastern and north-central United States and southern Ontario, but since the 1960s, there has been a 66% decline throughout their range.

A golden-winged warbler from the sub-population in Minnesota/Wisconsin (Photo by Tom Benson on Flickr, Creative Commons license)

Back in the 1990s, the Cornell Laboratory of Ornithology and several partners convened the Golden-winged Warbler Working Group and, with the help of 300 citizen-scientists throughout the birds’ breeding range, conducted a golden-wing survey from 1999 to 2006. They found that the golden-wing population had receded to two isolated sub-populations, one in Minnesota/Wisconsin and the other along the Appalachian Mountains. But the Appalachian Mountains’ regional population was down a whopping 98%, in part because the golden-wing habitat had decreased 43% since the 1960s.

Here in Pennsylvania, the Game Commission is one of the partners with the Cornell Lab in trying to recover golden-wing habitat. According to Jeffrey Larkin, a wildlife biology professor at the Indiana University of Pennsylvania, who is the regional coordinator for the GWWA (golden-winged warbler) Working Group, writing with Maria Bakermans in the Second Breeding Bird Atlas Project, golden-winged warblers nest “in ephemeral early successional habitat resulting from abandoned farmland, fire disturbance, timber harvest, utility rights-of-way, and managed shrublands.” They have a patchy distribution in the commonwealth, mainly through the southern Allegheny Mountains and through the Ridge and Valley Province with hotspots in Bedford and Huntingdon counties and much lesser numbers in the northeastern Pocono Plateau—in total about 6,300 singing males.

Since then, according to Doug Gross, Endangered and Non-game Bird Section Supervisor, the golden-wing range continues to contract, with no populations in the southeastern or northwestern parts of Pennsylvania and very few in the northern tier counties outside of Sproul State Forest and the Poconos. What populations are left are found mostly “off-road, requiring a walk into a cutting, a wetland, or a scrub barren to find these birds,” Gross writes in the October 2015 PSO Pileated, the newsletter of the Pennsylvania Society for Ornithology.

Habitat loss is only one of their problems. Nest parasitism by brown-headed cowbirds is another. The third problem, hybridization with blue-winged warblers, has produced fertile hybrids called “Lawrence’s” and “Brewster’s” warblers. Subsequently the GWWA Working Group discovered through pioneering genetic work on golden-wing blood samples by Rachel Vallender, that even birds that looked like golden-wings Vermivora chrysoptera had genetic evidence of post hybridization with their close congeners blue-winged warblers V. pinus.

The only solution to that problem seems to be targeting “landscapes with expansive forest cover at higher elevations” for golden-wings, which will keep them away from the lower-elevation breeding blue-wings, or so the researchers hope. They have already been managing such lands on both private and public land in Pennsylvania and having some success, for instance, at Bald Eagle State Park when Larkin, in 2009, thinned shrubs and trees from an overgrown old field and golden-wings returned.

The slight blush of yellow on the chest, and the bird singing a blue-winged song, provided good evidence of a golden-winged hybrid with a blue-winged warbler to the photographer (Photo by Kent McFarland on Flickr, Creative Commons license)

But when our JVAS visited State Game Lands No. 322 in mid-May along a large powerline right-of-way managed for golden-wings, the habitat seemed perfect with numerous scrub oaks and bush blueberries. We heard and saw 26 bird species, including three singing prairie warblers, a yellow-breasted chat, five chestnut-sided warblers, two gray catbirds, five eastern towhees, and numerous indigo buntings, field sparrows, and common yellowthroats but not one golden-winged warbler after a couple hours of walking slowly and listening.

Then we visited a JVAS member’s country property where she said they had golden-wings every spring. As soon as we exited our cars next to an unmanaged wet area, we heard a singing golden-wing. We never saw the elusive bird or any others on this property, much to our disappointment. Still, at least one golden-wing was there.

In Pennsylvania, breeding male golden-wings arrive in the first week of May two to seven days before the females, and they sing their primary song. They quickly pair up after the females arrive, and she chooses the nest site, which is usually at the base of leafy material such as wild berries or goldenrod. Sometimes they include a taller, thicker stem that supports the leafy material and allows the adults to grip when they arrive at a nest. 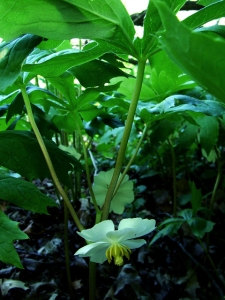 I remember stumbling on a nest at the Far Field thicket back on June 1, 1996. Mayapples blanketed this relatively open, wet area. A pair of loudly singing golden-wings flew close, and down low in the thicket a pair of Kentucky warblers distraction-displayed and called. As I retraced my steps back through the mayapple area, a golden-wing flew up from the ground. Almost immediately I saw her nest made of dead oak leaves on the outside and lined with grapevines and grasses. The nest held one brown-headed cowbird egg, which I removed, and one porcelain-white golden-wing egg, spotted with orange at the rounder end. Not wishing to attract predators, I never revisited the site.

Later, I read that females build their nests in one to three days and will often abandon incomplete clutches of eggs if they are disturbed. On the other hand, they will re-nest and lay a fresh batch of eggs if the first one is destroyed.

Most complete clutches contain four or five eggs and are incubated solely by the females for 11 days. Both parents feed their young while they remain in their nests for nine days, but after they fledge, the parents may divide them up, a process known as brood-splitting, and feed them as long as 31 days off their nesting territory, since golden-wings don’t have second clutches. They feed their young what they eat themselves—moths and their larvae, other flying insects, ants and spiders. 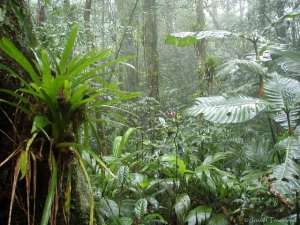 By late August or early September golden-wings are heading to their southern homes in Central and northern South America. At the Golden-winged Warbler Weekend, Ruth Bennett, a Cornell University PhD student, working under Dr. Amanda Rodewald, explained that she is studying them on their wintering grounds in Honduras, where they are most abundant, along with Costa Rica, Nicaragua and Panama and in lesser numbers in Colombia and Venezuela. Because golden-wings inhabit thick vegetation in mountaintop cloud forests, they are difficult to find so Bennett and other researchers use recorded golden-wing calls to attract males.

From 2009 to 2013, researchers captured, banded, and collected feathers from 1500 separate points. Altogether, they found 581 males and only 80 females, because it seems as if females spend their winters at lower elevations. But there is no doubt that male golden-wings prefer the high elevation humid broadleaf pine and oak forests of Nicaragua and Honduras, especially larger trees with hanging epiphytes at approximately 3,280 feet or more and females a low canopy at 1,640 feet.

Such habitat is rapidly disappearing because of clearing for cattle-farming, and poor agriculture practices in general as well as for open, sunny coffee plantations. Coffee drinkers in North America can help to change such plantations by purchasing only coffee grown in the shade amidst a mixture of plants and trees, so-called shade-grown coffee. 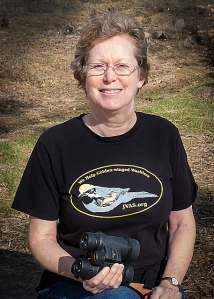 Modeled by JVAS President Laura Jackson, the golden-winged warbler T-shirt is part of a fund-raising effort to help preserve the habitat of the birds in Pennsylvania and Honduras (Photo copyright Mike and Laura Jackson)

In addition to creating more nesting habitat for golden-wings here, both on public and private land, with the aim of creating an additional one million acres of golden-wing habitat by 2050 and increasing the global population by 50%, a winter range conservation plan is also imperative.

Much work and research is necessary both here and there because there is still more to learn about the life history of these birds, but with so many researchers and citizens fired up to save this species, I felt optimistic, after our Golden-winged Warbler Weekend, that soon I will once again hear and see this beautiful warbler on our golden-wing habitat at the edge of First Field.