Keen birders are aware that the best time to identify the five small, look-alike Empidonax flycatchers that breed in Pennsylvania is in May when they are singing and calling during migration. Easier to identify by their voices than by their appearance, all empids, as birders call them, have gray heads, backs, wings, and tails, white wing-bars, light eye-rings, and whitish breasts and bellies with beige edges.

Over the nearly five decades we’ve lived on our Ridge and Valley mountain, I’ve heard four of the five empids, but I was thrilled last May 17, when our son, Mark, found a willow flycatcher singing from the old apple tree beside our driveway.

I rushed out to see and hear the bird as it flew into the top of a yard black walnut tree and sang—“fitz-bew,” “fitz-bew.” A half hour later it was in our backyard, where it clung to a tall grass and poked into our forsythia hedge, still singing. It stayed another day and then was gone.

Until 1972 willow flycatchers were lumped with alder flycatchers and called Traill’s flycatchers. Then ornithologists split the Traill’s into two species based on their songs. While willows sing a sneezy “fitz-bew,” the alders sing “tree-bee-a,” that sounds like “quick, three beers.” Although willows retain the species’ name traillii, alders are alnorum, meaning “of the alders.”

Willows breed across the northern two-thirds of the United States. Here in Pennsylvania they nest in brushy wetlands, wet meadows, and streamside thickets below 2300 feet. The females build compact cup nests several feet above ground in a forked branch of a shrub or small tree.

With an estimated 135,000 singing males in the state, it seems as if willow flycatchers are thriving here and also in the disturbed habitat in Central America where they spend their winters.

Many Mays ago I walked past our small wetland below our guesthouse and heard an alder’s “quick, three beers.” I never did see the bird but it, like the willow, was migrating through our property on its way north. Last May 30, Mark briefly heard and saw one in black locust saplings on the edge of First Field at the base of the powerline right-of-way.

Alders have the northernmost breeding range of any empid—across sub-Arctic Canada and Alaska, south to Ohio and Pennsylvania and through the Appalachians to North Carolina and Tennessee. Usually alders breed at an elevation between 820 and 2300 feet in denser, wetter, and more wooded habitat than willows, such as alder bogs, shrub swamps, and even recovering clear-cuts, but sometimes in the same habitat as willows.

Unlike willows, northern Pennsylvania is the southern edge of the alders’ core breeding grounds in the glaciated sections of the Appalachian Plateau, most notably Erie and Crawford counties in the northwest, according to BBA2. With a whopping 161% increase from BBA1, and an estimated 28,000 singing males, this species also is thriving here, although the wooded wetland habitat it depends on needs to be protected from human changes in the landscape. 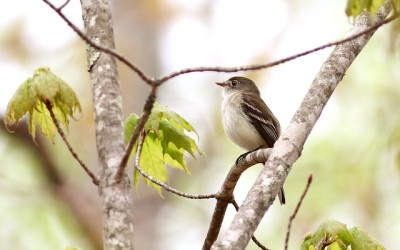 Least flycatchers E. minimus sing an emphatic “che-beck” over and over, a song I hear most springs during their migration up from Mexico and Central America when they arrive on our mountain as early as April 15, but usually by the first week in May. Like the alders, northern Pennsylvania is the southernmost breeding range for leasts, except for those that move down the Appalachians to North Carolina and Tennessee.

Last May Mark recorded them singing in the barberry shrubs and small walnut saplings in First Field and from large oaks and tulip trees in the higher hollows beyond Dogwood Knoll, and I heard one on May 24 in the old apple tree behind the guesthouse. The previous summer (2019), they were still singing and Mark hypothesized that they may be breeding here occasionally.

Leasts breed in open deciduous and mixed forest, woodland edges, orchards, and wooded suburbs, and in a recent 2008 study, they nested close to each other, probably to help deter predators, attract females or both. Their deep, cup-shaped nests are on deciduous tree branches less than 20 feet high and have eggs in them in late May and early June.

According to BBA2, there were scattered breeding records from the Pittsburgh Low Plateau and Ridge and Valley Province, but most leasts breed across Pennsylvania’s northern highlands. Unfortunately, breeding was down 6.6% from BBA1, with an estimated 138,000 singing males.

Acadian flycatchers E. virescens are now the most common breeding empid in Pennsylvania. Their loud, explosive “pit-see” is unmistakable once you hear it. However, I’d been hearing it for several years in our north-facing hollow and thought it was an alarm call of another songbird. Then, on May 22, 1994, as I led a field trip along our hollow road for our Audubon group, Stan Kotala identified the caller as an Acadian flycatcher. Once I knew the caller, I also heard it in the large oaks where we built our exclosure in 2001.

On May 22, 1995, the first Acadian was back and singing and on June 12, as I walked our hollow road, an Acadian started scolding me. I followed it with my binoculars and saw it go to a nest hanging from the end of an American beech branch 70 feet from the ground. It was a new breeding species for our property and for Blair County and suited the description in BBA1 which stated that the Acadian flycatcher “inhabits woodlands near streams, where it frequently builds in the pendant branches of a beech…”

On July 5, while driving my Dodge truck, I asked our son Steve to climb out on to the truck bed and check the nest. He saw two fluffy young still in the nest as a distressed adult Acadian called. We quickly retreated and late in July examined the empty nest constructed mostly of hemlock twigs and spider webs.

According to BBA2, Acadians reestablished their range in Pennsylvania and other eastern states in the early 1900s after a long absence probably due to nineteenth century deforestation because Acadians breed in lowland areas in old-growth woodlands near streams especially narrow, hemlock-lined ravines. They prefer a closed canopy and an open-to-moderate understory, but further south they breed in deciduous forest and bald cypress groves.

Pennsylvania is near the northern limit of their population that ranges west to Nebraska and Texas, south to the Gulf coast and central Florida. They breed in most of south, central and northwestern Pennsylvania with a 30% increase from BBA1 to BBA2 and an estimated 149,000 singing males. By late July until the third week in September they begin migrating south to their wintering grounds in south Central America and northern South America.

The least common of the empids here are yellow-bellied flycatchers E. flaviventris. Breeding across Canada to southern Minnesota and Pennsylvania, these shy birds hide in dense thickets during migration and rarely sing. They breed at elevations from 1660-2250 feet in bogs and open swamps with sphagnum moss and scattered canopy deciduous and conifer trees and build nests on the ground on sphagnum hummocks hidden by shrubs or ferns. They sing “killink,” and call “chu-wee” from prominent perches.

Once thought to have left Pennsylvania after nesting in the Mt. Pocono area in the early twentieth century, in 1980 Douglas A. Gross found an adult yellow-bellied with young in a Sullivan County hemlock grove, the first confirmed nesting here in 42 years. They breed as early as May 24 but as late as June 20. The nest Gross first found fledged young on June 23 but the male continued feeding them until July 7. Later studies by Gross found that a few pairs are double-brooded with new nests as late as August 2.

Today a few breed mostly on North Mountain in Sullivan and western Wyoming counties and have been listed as Endangered by the Pennsylvania Game Commission and Pennsylvania Biological Survey.

Mark recorded what was incessant calling by a yellow-bellied that he saw below our Greenbrier Trail last May 20 in the early morning, proving that May is the premier month for hearing the songs and calls of those darn empids.

2 thoughts on “Those Darn Empids”