On an early May morning, I step outside and hear a warble of clear, bright, musical notes. The indigo buntings have returned. Also known as “blue canaries” because of their color and song, I’ve never been able to describe indigo bunting song to others except to say that I know it when I hear it.

Other folks have had more success or perhaps a better ear. Arthur A. Allen, a prominent Cornell University ornithologist back in the 1930s, described it as “sweet, sweet, where, where, here, here, see it, see it,” and when I listen to its variable song on the Cornell Laboratory of Ornithology’s website (the Lab was the brainchild of Allen’s), his description seems apt. But the Lab website cuts Allen’s description down to eight words instead of ten—“what, what, where, where, see it, see it.” 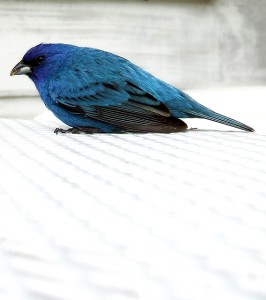 In fact, both descriptions are correct. That’s because a male indigo bunting has one complex song that combines 6 to 8 kinds of notes in different sequences. Furthermore, that choice of notes in his song is unique to what ornithologists call a “neighborhood” of indigo buntings, i.e. anywhere from 3 to 4 up to 22 males in adjacent territories that average 3 acres. And males living approximately a mile and a half apart have different songs which they develop from a repertoire of about 100 notes.

Unlike many songbirds, indigo buntings do not learn their songs from their fathers during their natal year. Instead, as first year males 80% of them match the song of neighboring males while 20% appear to learn their song somewhere else before settling on their own territory. Once they establish themselves, indigo bunting males sing 200 songs an hour at dawn, one song per minute the rest of the day, and they sing well into August.

The brilliant Prussian blue males with wings edged in black are often described as a piece of the sky come down to earth and like the sky, which only appears to be blue, their feathers merely refract and reflect blue light. The only pigment their feathers have is melanin. This gives them a brown-black color that is obvious if you hold a feather so that the light comes from behind instead of toward it as we usually see the bird. For this reason, male indigo buntings look more black than blue in poor light.

The females, who do most of the work of raising young ones, are mostly brown with lightly streaked breasts and are often mistaken for sparrows. Like the males, they have silver-gray conical bills, but while the males perch on the highest point in the shrubby, overgrown fields they favor, belting out their songs, the females stay hidden, sitting on open cup nests they have woven in shrubs or saplings.

Courtship is short, and females settle on a male’s territory a day or two after arriving. She chooses the nest site in fields or the edges of woods, railways or roadsides, in shrubs, such as blackberries, gray dogwoods, multiflora roses, and staghorn sumacs, in goldenrods and nettles, or in sapling trees such as black locust, aspen, elm, black birch or maple. Usually she builds the nest 1.5 to 3 feet above the ground but sometimes as much as 10 feet later in the season. Nest materials of soft leaves, grasses, stems and strips of bark are held together by weaving and by wrapping the nest in spider webs, and grasses and sometimes deer hair line the nest.

Then she lays 1 to 4 white eggs on subsequent days and begins incubating them after the last egg is laid. It takes from 11 to 14 days, depending on the weather, for her eggs to hatch. Once her chicks arrive, she broods and feeds them small insects, spiders, and berries, as much as 54 times a day with breaks averaging 16 minutes for very young nestlings. The only time she gets a rest is after the young fledge as early as 8 days old if they are disturbed but up to 14 days in cool weather, although on average they fledge at 9 to 12 days of age. The male then pitches in to help feed the fledglings and completely takes over after a few days. In the meantime, she is busy constructing a new nest, laying and incubating the second batch of eggs.

Our overgrown, brushy, 37-acre First Field and smaller Far Field appear to be ideal indigo bunting habitats, and occasionally I discover a nest. Last July 7, while walking around the Far Field on Pennyroyal Trail, I startled a brown female that scolded and skittered off into the grass. I couldn’t persuade her to reappear, but almost immediately I discovered a nest containing three white eggs in a small black locust sapling.

Five days later I again took the Pennyroyal Trail and found the indigo bunting nest intact but empty as if some creature had tipped it slightly and removed the eggs. I suspected a raccoon to be the culprit especially after I learned that one was observed by researchers removing eggs from a nest without disturbing it, but other possible nest predators include red foxes, opossums, feral cats, blue jays and snakes.

Then, early in August, while picking blackberries in a patch in First Field, I heard what sounded like a rapid “tick-tick.” It turned out to be indigo bunting fledglings begging for food. I had an excellent look at one perched in the deepest part of the patch, well-protected from predators. Once I glimpsed the female trying to fly in to feed them, but she veered off when she saw me, not wanting to give away the location of her fledglings. The fledgling I saw did flutter off to another part of the patch so it was able to fly a short distance. Last January I found their intact nest 3 feet from the ground in a black birch sapling at the edge of the blackberry patch.

Here in Pennsylvania indigo buntings breed from May 6 until September 11 and they have nests with eggs from May 24 until July 9. But sometimes they have clutches as late as August 3, so the nest I found at the Far Field was a late, unsuccessful clutch. Early in the season, indigo bunting nests can be heavily parasitized by brown-headed cowbirds, however, in a Michigan study, 69% of nests were successful.

Because they are generalists that adapt to a wide variety of habitats, especially interspersed woodlands and farmlands, they are one of Pennsylvania’s most common songbirds with the highest numbers in our Ridge and Valley Province. They were abundant during both atlasing projects, and male numbers are estimated at 1.5 million. Still, the Breeding Bird Survey recorded a modest 15% decrease, perhaps because of conditions on their wintering grounds.

They begin leaving Pennsylvania late in August, but peak migration occurs during the last two weeks in September. During the second and third weeks in October, 50 or more birds have been observed in overgrown, brushy fields. They spend their winters in southern Florida, Mexico, Central America, and on Caribbean islands.

indigo bunting in the rain — photo by Dave Bonta

But how do they find their way? It turns out that as young birds they are stargazers. And it was Cornell Lab ornithologist Stephen T. Emlen who proved this. Using what later was called an “Emlen funnel,” he put an indigo bunting experiencing migratory restlessness or zugenruhe into a funnel-shaped cage that he had line with paper, and supplied with an ink pad perch at its bottom. The bird repeatedly leaped from the ink pad to the funnel’s side, leaving its footprints on the papered wall. In that way, the bird left a record of its migratory direction and depending on its hormonal condition, oriented north or south. Emlen followed this by proving that those songbirds that travel at night use the stars as a guide, specifically the North Star, Polaris, which stays in the same position all night and the Big Dipper and other nearby stars which rotate around Polaris in a counterclockwise direction. In addition, Emlen found that they learned their way as young birds watching the sky at night. Since his work, other discoveries about bird migration continue to be made and they appear to use magnetic fields to orient themselves too.

Indigo buntings breed from the Great Plains eastward to the Atlantic seaboard and from southern Canada to the southern United States. Then they head to their winter homes. Many indigo buntings return to the same site both in their wintering grounds and their breeding grounds, according to a variety of studies, although the males seem to be more faithful to their home grounds than females are. It’s intriguing to realize that those males I see every year sitting on the same singing perches may be as wedded to our habitat as I am.